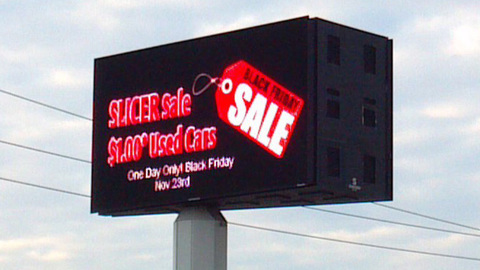 Black Friday is the busiest shopping day of the year. People start lining up for sales hours and sometimes days in advance for an opportunity to purchase a television or other hot holiday item and save money. For many, it’s the thrill of the hunt. However, it’s estimated that consumers will spend half of their holiday budget on this single day this year. While everyone is looking to save money, car dealers have historically found it difficult to draw people away from Wal-Mart, Best Buy and Target or, more recently, away from their computers as online retailers get more aggressive. Retailers have even begun to open on Thanksgiving Day itself in an attempt to one-up competitors and grab a larger percentage of the pie.

Unlike holidays such as Labor Day and Memorial Day, Black Friday is typically not known for being one of the best days of the year to buy a vehicle, despite many dealerships advertising deep discounts. According to Automotive News, one dealer in Houston has succeeded in turning Black Friday into an event. In what can only be considered a public relations all-you-can-eat buffet, Sterling McCall Toyota has taken an idea directly from the 2004 movie “Slasher” to generate crowds of people lining up as early as 5 a.m., as well as local news coverage. Started in 2008, their “Slicer Sale” offers “three vehicles… priced at $1, $10 and under $1,000 and 50 below $10,000.” According to the article, they sell up to 40 percent of their used car inventory that day, in addition to enjoying a 30 percent increase in new-vehicle sales.

Manufacturers are beginning to create programs designed to increase traffic at their franchises with special savings on Black Friday. GM is currently promoting its “GM Supplier Pricing“ special which is voluntary for their dealers.  This manufacturer-sponsored program could very well help increase traffic at dealerships and set a precedent that other OEMs may start to adopt.

For many consumers, Black Friday is more than just about savings. It’s also about the thrill of the hunt. Being able to grab one of the five deeply discounted televisions at Best Buy or one of the holiday’s hottest gifts is worth the price of admission. The admission price typically includes long hours spent waiting in lines. You’d think that someone in the market for a vehicle would see the value in saving thousands of dollars on their new vehicle acquisition over the $50 (and time lost) to secure that television. However, historically, that’s just not been the case.

Group 1 (the organization that owns Sterling McCall) sees this as an “advertising and promotion” opportunity and it has certainly paid off for them. “Think about what three cars might cost and factor into what a TV ad or mass media would cost” said Group 1’s vice president of manufacturer relations and public affairs, Pete DeLongchamp.  I think there is also great public relations value in that it helps increase awareness of the dealership in the local community, and creates an event that generates buzz the entire year.

On this hyper-competitive shopping day, Sterling McCall Toyota, has managed to compete with all of the other retailers vying for consumers’ shopping dollars and create an event that generates buzz and excitement in their community – something that doesn’t happen very often with car dealerships. Their clever marketing has allowed them to generate massive traffic on the biggest shopping day of the year and has also gained exposure for the dealership that money just can’t buy.