Automotive Managers: Which Of The 12 Emotional Intelligence Skills Do You Need to Work On? 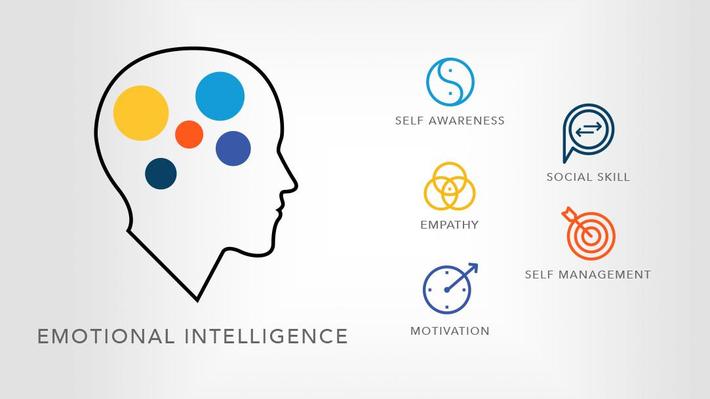 Emotional Intelligence for auto industry managers is hardly a "one-size-fits-all" situation. Here's how to make sure you and your management team stay well-rounded...

Esther is the well-liked manager of a dealership's BDC team. Kind and respectful, she is sensitive to the needs of others. She is a problem solver; she tends to see setbacks as opportunities. She’s always engaged and is a source of calm to her colleagues. Her general manager feels lucky to have such an easy direct report to work with and often compliments Esther on her high levels of emotional intelligence, or EI. And Esther indeed counts EI as one of her strengths; she’s grateful for at least one thing she doesn’t have to work on as part of her 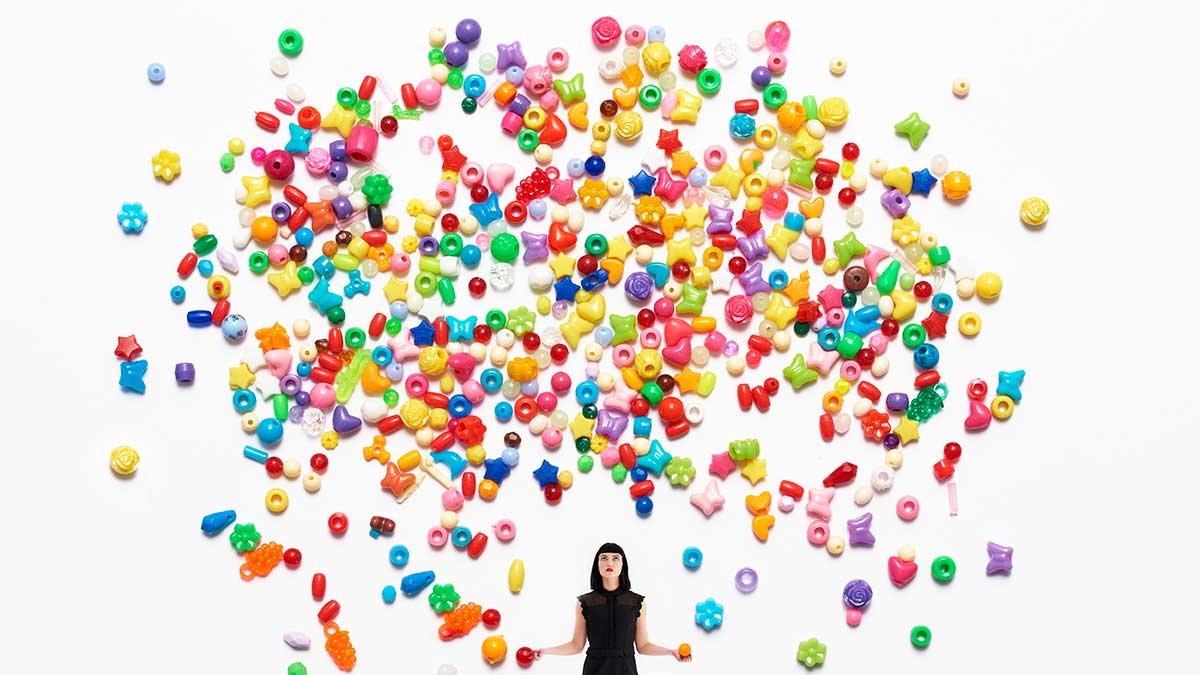 leadership development. It’s strange, though — even with her positive outlook, Esther is starting to feel stuck in her career at the dealership. She just hasn’t been able to demonstrate the kind of performance and results that her dealer principal and general manager are looking for. So much for emotional intelligence, she’s starting to think.

The trap that has ensnared Esther and her managers is a common one: They are defining emotional intelligence much too narrowly. Because they’re focusing only on Esther’s sociability, sensitivity, and likability, they’re missing critical elements of emotional intelligence that could make her a stronger, more effective leader. This HBR article highlights the skills that a kind, positive manager like Esther might lack: the ability to deliver difficult feedback to employees, the courage to ruffle feathers and drive change, the creativity to think outside the box. But these gaps aren’t a result of Esther’s emotional intelligence; they’re simply evidence that her EI skills are uneven. In the model of EI and leadership excellence that we have developed over 30 years of studying the strengths of outstanding leaders, we’ve found that having a well-balanced array of specific EI capabilities actually prepares a leader for exactly these kinds of tough challenges.

There are many models of emotional intelligence, each with its own set of abilities; they are often lumped together as “EQ” in the popular vernacular. We prefer “EI,” which we define as comprising four domains: self-awareness, self-management, social awareness, and relationship management. Nested within each domain are twelve EI competencies, learned and learnable capabilities that allow outstanding performance at work or as a leader (see the image below). These include areas in which Esther is clearly strong: empathy, positive outlook, and self-control. But they also include crucial abilities such as achievement, influence, conflict management, teamwork and inspirational leadership. These skills require just as much engagement with emotions as the first set, and should be just as much a part of any aspiring leader’s development priorities. 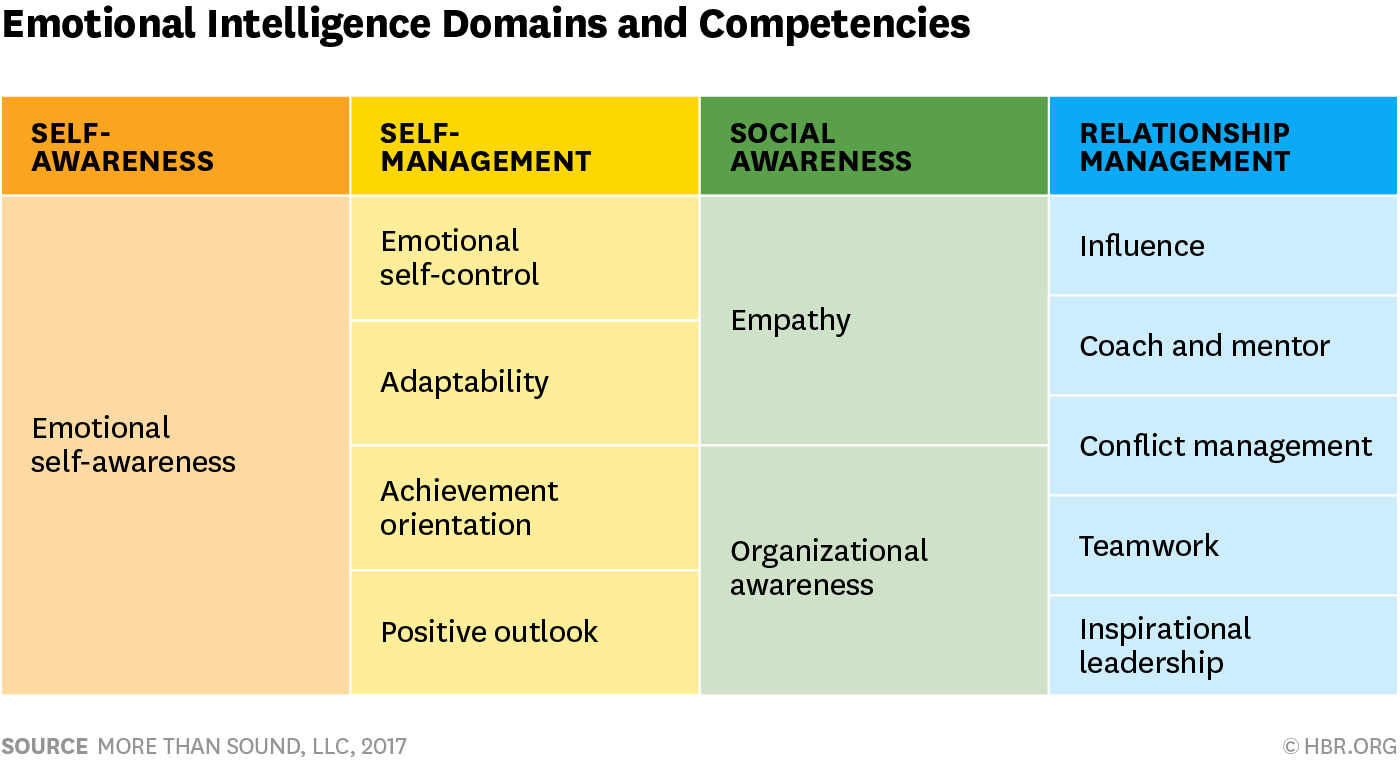 For example, if Esther had strength in conflict management, she would be skilled in giving people unpleasant feedback. And if she were more inclined to influence, she would want to provide that difficult feedback as a way to lead her direct reports in the BDC and help them grow. Say, for example, that Esther has a peer who is overbearing and abrasive. Rather than smoothing over every interaction, with a broader balance of EI skills she could bring up the issue to her colleague directly, drawing on emotional self-control to keep her own reactivity at bay while telling him what, specifically, does not work in his style. Bringing simmering issues to the surface goes to the core of conflict management. Esther could also draw on influence strategy to explain to her colleague that she wants to see him succeed, and that if he monitored how his style impacted those around him he would understand how a change would help everyone.

Similarly, if Esther had developed her inspirational leadership competence, she would be more successful at driving change. A leader with this strength can articulate a vision or mission that resonates emotionally with both themselves and those they lead, which is a key ingredient in marshaling the motivation essential for going in a new direction. Indeed, several studies have found a strong association between EI, driving change, and visionary leadership within the auto industry.

In order to excel, automotive managers and leaders need to develop a balance of strengths across the suite of EI competencies. When they do that, excellent business results follow.

How can you tell where your EI needs improvement — especially if you feel that it’s strong in some areas?

Simply reviewing the 12 competencies in your mind can give you a sense of where you might need some development. There are a number of formal models of EI, and many of them come with their own assessment tools. When choosing a tool to use, consider how well it predicts leadership outcomes. Some assess how you see yourself; these correlate highly with personality tests, which also tap into a person’s “self-schema.” Others, like that of Yale University president Peter Salovey and his colleagues, define EI as an ability; their test, the MSCEIT (a commercially available product), correlates more highly with IQ than any other EI test.

We recommend comprehensive 360-degree assessments, which collect both self-ratings and the views of others who know you well. This external feedback is particularly helpful for evaluating all areas of EI, including self-awareness (how would you know that you are not self-aware?). You can get a rough gauge of where your strengths and weaknesses lie by asking those who work with you to give you feedback. The more people you ask, the better a picture you get.

Formal 360-degree assessments, which incorporate systematic, anonymous observations of your behavior by people in the dealership who work with you, have been found to not correlate well with IQ or personality, but they are the best predictors of a leader’s effectiveness, actual business performance, engagement, and job (and life) satisfaction.

Into this category fall our own model and the Emotional and Social Competency Inventory, or ESCI 360, a commercially available assessment we developed with Korn Ferry Hay Group to gauge the 12 EI competencies, which rely on how others rate observable behaviors in evaluating a leader. The larger the gap between a leader’s self-ratings and how others see them, research finds, the fewer EI strengths the leader actually shows, and the poorer the business results.

These assessments are critical to a full evaluation of your EI, but even understanding that these 12 competencies are all a part of your emotional intelligence is an important first step in addressing areas where your EI is at its weakest. Coaching is the most effective method for improving in areas of EI deficit. Having expert support during your ups and downs as you practice operating in a new way is invaluable.

Even dealership managers with many apparent leadership strengths can stand to better understand those areas of EI where we have room to grow. Don’t shortchange your development as a leader by assuming that EI is all about being sweet and chipper, or that your EI is perfect if you are — or, even worse, assume that EI can’t help you excel in your career.

Edited and re-posted from articles written by: