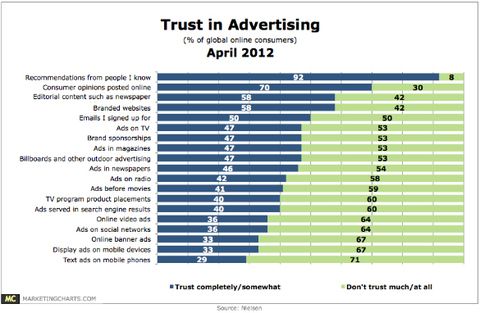 This finding contrasts with April 2012 survey results from Ipsos, which found that while automotive consumers worldwide may turn to their friends for advice on vehicle purchases and repair services, only 38% will trust a dealership, make of vehicle or a service department more because friends recommended it.

Data from Nielsen’s “Global Trust in Advertising 2012″ indicates that automotive consumer trust in traditional paid advertising messages has taken a significant drop. While close to half say they trust TV (47%), magazine (47%), and newspaper ads (46%), confidence in these ads has dropped by 24%, 20%, and 25%, respectively from 2009 to 2011, when the latest survey was conducted.

Despite this fall in trust, traditional media ads, particularly on TV, appear to have their intended effect. According to April 2012 survey results from ExactTarget, TV ads influence a larger proportion of online automotive consumers... a product or service than a variety of other advertising media. 53% of respondents said a TV ad had influenced them to purchase a vehicle or maintenance service in the past 12 months, putting TV ads far ahead of newspaper ads (32%) and magazine ads (30%). In fact, three times more respondents said they had been influenced by a TV ad than by a banner or other ad on a website (53% vs. 18%).

The Nielsen study finds that trust in most online ads is relatively lower than on traditional media, save for ads found on OEM branded websites, which are trusted by 58% of consumers. For example, only 40% trust ads served in search engine results, while just 36% trust online video ads, or ads on social networks. These findings are similar to Nielsen and NM Incite survey results released in February 2012, which found more trust in branded website ads than any other form of online adv.... 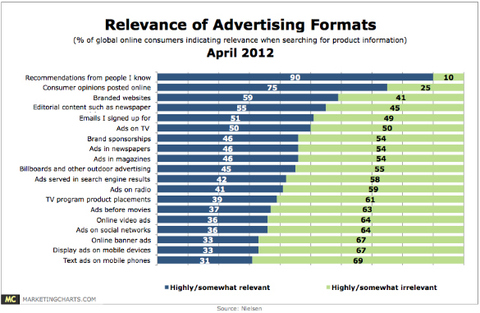 The Nielsen survey also asked respondents to identify which advertising and brand messaging platforms are the most relevant to them when searching for information about the products, finding that the relevancy results often mirrored the trust responses. Recommendations from friends and family again topped the list, at 90% of respondents, followed by consumer opinions posted online (75%), branded websites (59%), and editorial content such as newspaper articles (55%). The relevance of paid traditional media platforms ranged from about 40-50%, while many online platforms scored lower, save for ads served in search engine results (42%).

About the Data: The Nielsen Global Trust in Advertising Survey was conducted in August/ September 2011 and polled more than 28,000 consumers in 56 countries throughout Asia Pacific, Europe, Latin America, the Middle East, Africa and North America. The Nielsen survey is based on the behavior of respondents with online access only. Internet penetration rates vary by country. Nielsen uses a minimum reporting standard of 60% internet penetration or 10M online population for survey inclusion.

Thanks Ralph, this appears to be a continuing trend that dealers should follow.  Word-of-mouth is king.