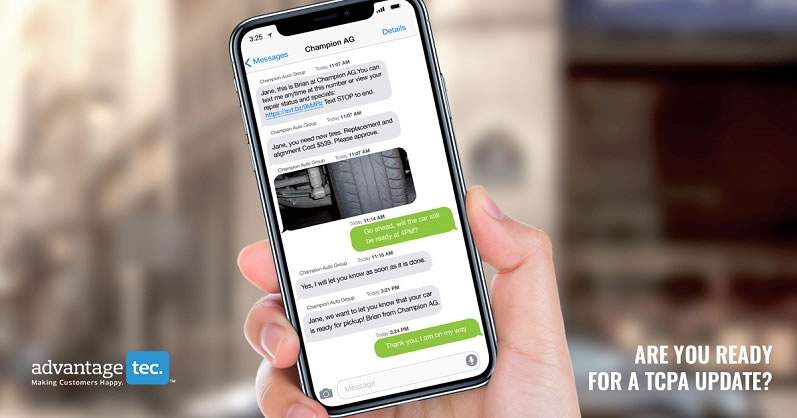 Technology revolutionized the way people communicate. Every day we see new apps which improve how we interact with each other. However, in order to be used, all those apps need to comply with laws and regulations ordered by the Federal Communications Commission (FCC), namely the 1991 Telephone Consumer Protection Act of 1991 (TCPA).

Likewise, people who use those apps for business purposes need to comply with TCPA rules. And these are rigorous. If you are in breach, you could pay between $500 and $1500 per text sent. Just imagine by having thousands of texts sent every month what a class action lawsuit could do to your business.

The ending of 2017 ended up turbulently with the abrupt net neutrality decision. Even though this is not something new to happen, it can have major consequences on the market. Likewise, the upcoming update of out-of-date TCPA rules can also be important for your car dealership.

If you want to stay in the know, see what TCPA compliance challenges might arise in the future and what to expect in 2018.

ACA International, the Association of Credit and Collection Professionals published a white paper in May 2017 which examines the ‘antiquated’ rules of the Telephone Consumer Protection Act of 1991 (TCPA rules).

Their main claim is that the main definitions under TCPA are already too old due to the fast development of technology, which it failed to anticipate or adjust to in the meantime, such as the definition of the autodialer, revocation of consent, as well as reassigned cellphone numbers, which the National Do Not Call Registry (DNC) confirms and examines in their January 2018 TCPA Watch List.

According to the ACA white paper, there is also a significant disproportion in a number of telephone calls some people get as opposed to others who are completely excluded from receiving legitimate business communications. Their data show that 76.5% of individuals aged 65 or higher live in households with a landline, whereas there is a dramatic demographic difference between them and 72.7% of 25-29 year-olds who live in a wireless-only household. This may mean that the older groups might get more telephone marketing calls than the younger ones, thus maximizing exposure to TCPA liability.

ACA International report also suggests a modernization of the TCPA which would ensure consumers get “normal, expected, and desired information, as well as provide clarity for businesses to engage in targeted, beneficial communication with specific consumers, and free the courts to attend to the needs of real victims of harassment and abuse,” thus encouraging legitimate business interactions.

2. Freeing the courts from unnecessary lawsuits

Furthermore, DNC quotes a study by the Institute for Legal Reform which was conducted between July 2015 and December 2016 that discovered there were more than 3,000 TCPA lawsuits filed. Withal, TCPA litigation further led to multimillion-dollar settlements, such as the Caribbean Cruise Line – $76 million, Uber – $20 million, and the Tampa Bay Buccaneers – $19.5 million.

Updating the TCPA according to the necessities of the modern man and the modern business world would, thus, free courts from unnecessary lawsuits which would be easily understood through an updated Act.

Find this read useful? Here are more stories regarding TCPA and texting: