Half of American Car Buyers Engage with Companies on Social Networks - What about Dealers and their Employees?

Half of all Automotive Consumers say they Engage with Businesses on Social Networks... What about Car Dealers? 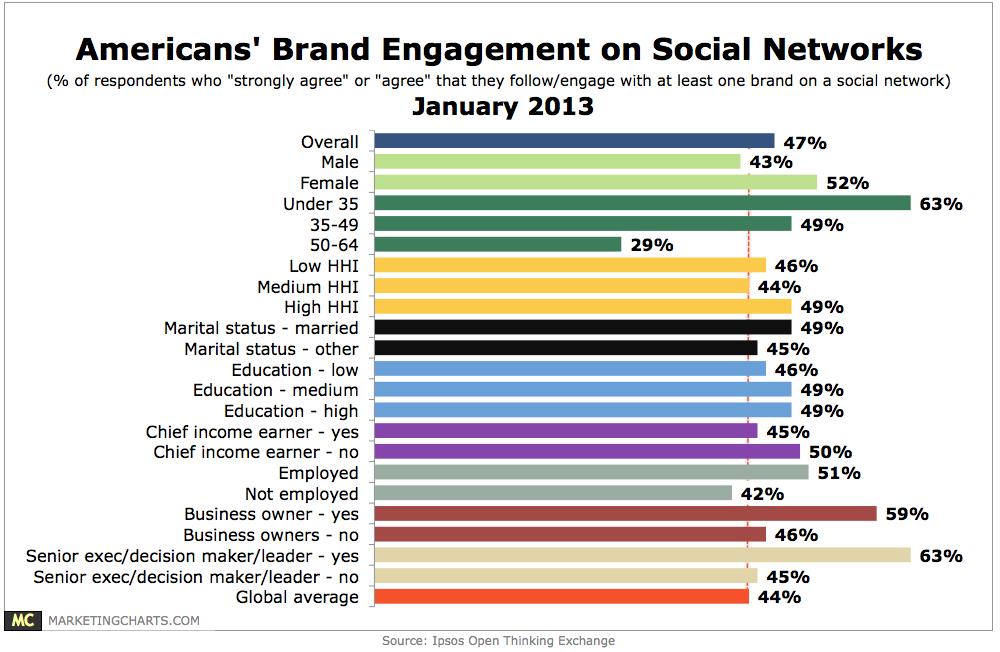 Are car dealers taking advantage of their own prominence and social standing within local communities? Are dealers leveraging their social media active employees to connect with car buyers and service department customers? According to some recent research, 47% of American consumers agree that they follow or engage with at least one brand on a social networking site. Why did I headline this article with a statement saying that half of automotive consumers engage with a business? Because every source of data I look at tells me that car buyers are more likely to use social media sites and networks than those Americans who are too old or too young to be an active automotive consumer. And, the Survey results from Ipsos Open Thinking Exchange puts American consumers at least 3 points above the 24-country average at 44% in social media based "brand engagement".

Among American automotive consumers, women are 21% more likely than men to say they engage with brands on social networks. As a whole, the 18-34-year-old segment of American car buyers and service department customers are more than twice as likely as those 50 and up to connect with any business on a social network (63% vs. 29%).

The Ipsos Open Thinking Exchange study also reveals some other interesting demographic based social media marketing dynamics for car dealers and any business seeking engagement with their customers:

It seems interesting to me that there appears to be little correlation between the time spent social networking by an automotive consumer and their propensity to follow a brand or connect with a local dealership online.  The data shows that the automotive consumer's demographic category has little impact on time spent carousing around social networks and a propensity to engage with a business. 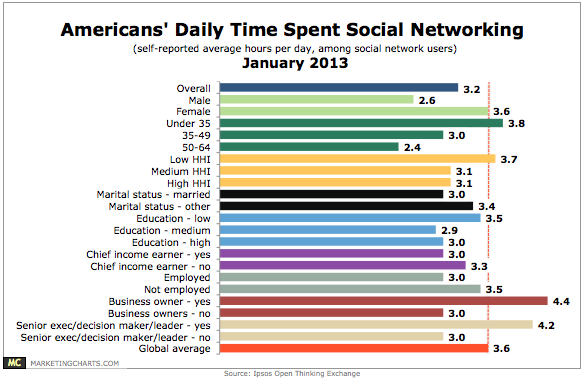 Those same gaps were not seen in their latest brand engagement study. Although I found it particularly interesting that car dealers, general managers, business owners and senior executives appear to spend more time social networking and are far more likely to engage with the brands they use as suppliers or are considering using.... Hmmm... Maybe that explains why so many suppliers seek to publish their content on sites like ADMPC.com, dealerELITE.net, AutomotiveSocial.com and AutomotiveReputation.com.

It did not surprise me at all to see the data contained inside the Ipsos report showed that both female executives and consumers outpaced their male counterparts. , and that younger business owners, car dealers, general managers and executives out-engaged their more mature counterparts in all aspects of leveraging social media for business purposes... Shame on my own generation for falling behind! If I can do it, then certainly any car dealer, general manager or car company executive can do it as well.

Alexander, I have assisted dealers in setting up both private and public social networks using Ning... It is a remarkably flexible platform and can be set up for a variety of public and limited access features.  Any apps built to Google OpenSocial standards can plug into a Ning Network and the developer community is extensive.

My thoughts, not enough of this happens. To be honest, I don't think enough dealerships do this correctly for their target audience / demographic let alone their employees. Obviously, it depends on the size and the intentions of the dealership, but thi will grow in coming years, just the tip of the iceberg.

I should mention, I've seen plenty of NING sites (affordable for internal social media channels) set up internally at dealerships, which does give the publisher a good way of communicating internally with their employees, but not in a public facing manner.