Automotive advertising is headed for its lowest level in nine years, even as more money is shifting from TV and print media to the Internet. The downturn is the result of efforts by automakers and dealers to cut expenses in a soft market. This year, automakers and dealers will spend about $15 billion to advertise in U.S. media, the Wall Street research firm Sanford C. Bernstein & Co. estimates in a new report. That's down 16 percent from 2007 and the lowest total since 1999, says Bernstein senior analyst Michael Nathanson.

Bernstein Research projects that auto advertisers will spend an average of $1,057 for every new vehicle sold in 2008,down 19 percent from the peak in 2004. "TV stations and local newspapers will lose the most advertising dollars, followed by broadcast networks," Nathanson predicts.

In the first three months of 2008, according to a separate study by TNS Media Intelligence, car companies and dealers spent about $3.63 billion on U.S. advertising. Automakers accounted for 54.7 percent of that spending, compared with 29.9 percent by dealerships and 15.4 percent by dealer associations.

In July, General Motors said it plans to reduce its ad budget by an undisclosed amount. Last year, GM spent $2.1 billion on U.S. advertising, TNS estimates. The company cut its ad spending by nearly $1 billion from mid-2005 through 2007, TNS says. 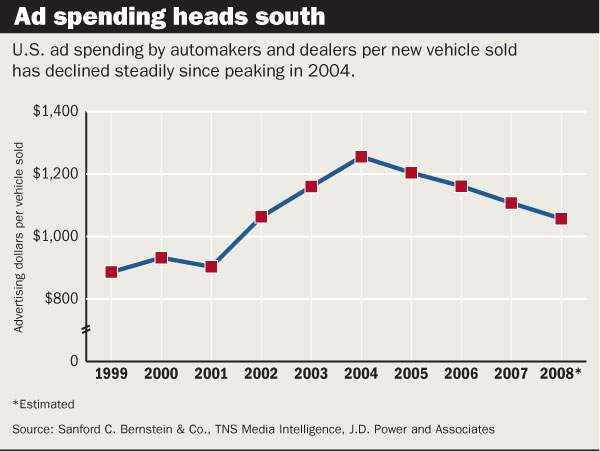 Backing away from big events

GM has dropped its ad sponsorships of such marquee events as the Academy Awards and this month's Emmy Awards. GM plans major online ad campaigns for new models such as the 2009 Chevrolet Traverse crossover and 2010 Cadillac CTS wagon.

GM marketing spokeswoman Kelly Cusinato says the company looks at direct consumer engagement to assess its return on ad spending. The payback from digital investments is easier to measure than that of traditional mass media, she says. "Where are we getting the biggest bang for our buck?" Cusinato said. "Digital has the advantage of better metrics. And you can tailor the message and be at the place where customers are."

Chrysler LLC also is "making a conscious effort to shift to the Internet" to promote vehicles, says spokeswoman Carrie McElwee. She says Chrysler will go heavily online in the launch campaign for the redesigned 2009 Dodge Ram pickup, which arrives in showrooms this month. 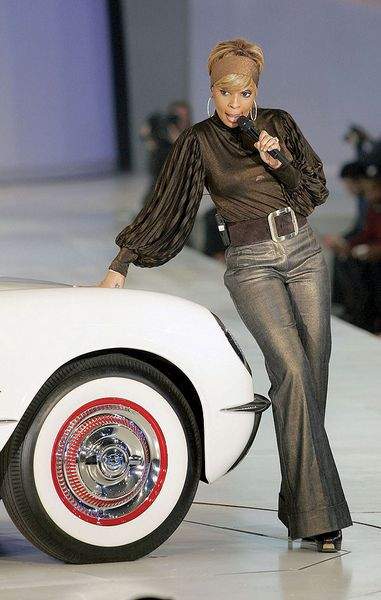 Mary J. Blige has been part of the GM sales pitch.

Advertising on the Internet "helps us increase our efficiency and effectiveness," McElwee says. "And if things need to be changed, we can change them quickly."
McElwee declined to disclose the budget for the Ram launch. When Chrysler introduced the 2009 Dodge Journey crossover in April, Dodge said digital ads accounted for 29 percent of launch spending.

Nelson Bliss, general manager of Melody Toyota in suburban San Francisco, says the dealership cut its ad budget this year from as much as $50,000 a month to $33,000. About 80 percent of the budget now goes to the Internet, he says.

"There were not enough leads from television and newspapers," Bliss says. "It wasn't cost-effective spending. I don't use TV at all now. I use print and radio only occasionally."

Hyundai Motor America is budgeting $80 million to launch the new Genesis sedan. About 70 percent of ad spending is going to TV, compared with 17 percent online, including marketing efforts on the company's Web site.

"You've got to start the story and the conversation with the consumer," Ewanick says. "A great place to do that is in television. Then you finish the story in depth online."

"We are taking it month by month," Nakashima says. "There are opportunities in the market now, because some of our competitors are pulling back." 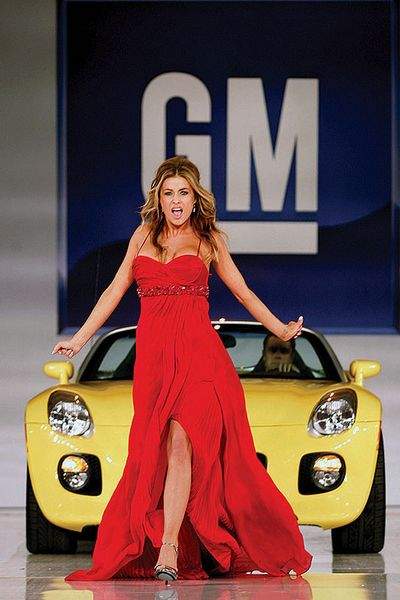 Model Carmen Electra appeared at a GM fashion show during the 2006 Academy Awards. GM is cutting back on sponsorships of big events such as the Oscars.

Mark Rechtin contributed to this report

Comment by David T. Gould on September 7, 2008 at 8:46pm
Ralph, Thanks for posting article... I'll be referring dealers to this link.