Dealer Profitability Has Stagnated for 7 Years

American Auto Dealer profits seem to be stuck in neutral since 2001...

For the sixth straight year, U.S. auto dealer profitability failed to improve in 2007. When considering the current and continuing credit crunch, combined with industry projections of slumping sales in 2008, the prospects for dealership profits in 2008 don't look much brighter.

The average franchised new-vehicle dealership made a net pretax profit of 1.5 percent of sales last year, according to National Automobile Dealers Association (NADA) reports. That rate tied with 2006 for the worst performance since 1997, when profitability averaged 1.4 percent.

NADA chief economist Paul Taylor says he expects little if any improvement in 2008. Taylor predicts this year's sales of new cars and light trucks will be the lowest since 1998.

Average profitability did not rise in 2007 even though the Federal Reserve Board cut interest rates last summer and fall. Those moves modestly reduced the interest rate that dealers paid to finance vehicle inventory.

Last August, a typical dealer paid floorplan interest of 8 percent, according to one NADA 20 group consultant. By the end of the year, after the Fed rate cuts, that rate had dropped to 7 percent.

But the effect on profitability of lower interest costs was negligible compared with 2001. That year, 17.2 million new-vehicle sales and low interest rates helped dealers earn an average pretax profit of 2.0 percent of sales — the highest rate since 1986. 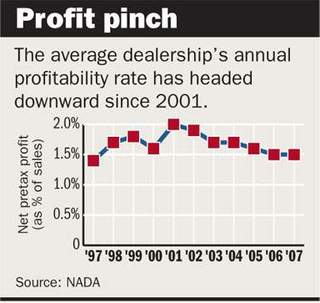