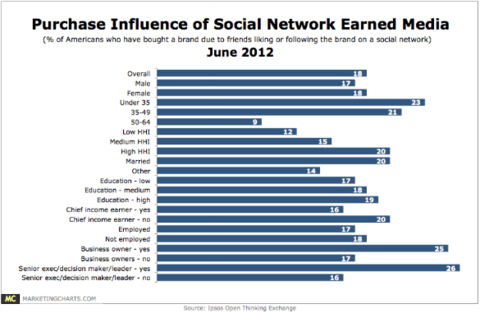 18% of US consumers - including 23% under 35 - have bought a brand because their friends like or follow the brand on a social network, per findings from an Ipsos survey released in June 2012.

A comScore study released in June used a variety of case studies to demonstrate that Facebook earned media influences buyer behavior, with friends of fans proving a potent audience for brands.

Marketers appear to see some value in Facebook’s ability to fuel purchase intent, although they are somewhat ambivalent about the extent to which this is the case. According to an AdAge survey of its readers (who classified themselves as decision-makers in social media marketing), while slightly more than two-thirds say that Facebook is at least somewhat useful in driving purchase intent, the majority of those respondents (55.5% overall) believe that it is only somewhat useful.

Further data from the AdAge survey reveals that more than 7 in 10 marketers expect to increase their social media advertising budgets over the next year, compared to 25.3% who will maintain current levels and 1.9% who will decrease spending. Interestingly, though, a smaller proportion (56.4%) will increase their Facebook ad budgets, suggesting that social media advertising budgets may be headed for other networks.

About the Data: The Ipsos data is based on a survey of 12,000 consumers; 500 each in 24 countries. The AdAge survey was conducted in conjunction with Citigroup, and received responses from 658 subscribers.

Great article Ralph. In fact, this kind of data was the reason we wanted to help car buyers and sellers in the social media world by offering a car buying and selling experience which is fun, social and productive.

Feel free to check out our site carhoots.com ,

We've only recently launched so let me know if you have any feedback. Our review section of the site is heavily influenced by the fact that people are more interested in what their friends are saying about a car more than brands, experts, magazines etc.

Wold be great to know your thoughts and look forward to reading more automotive social articles!