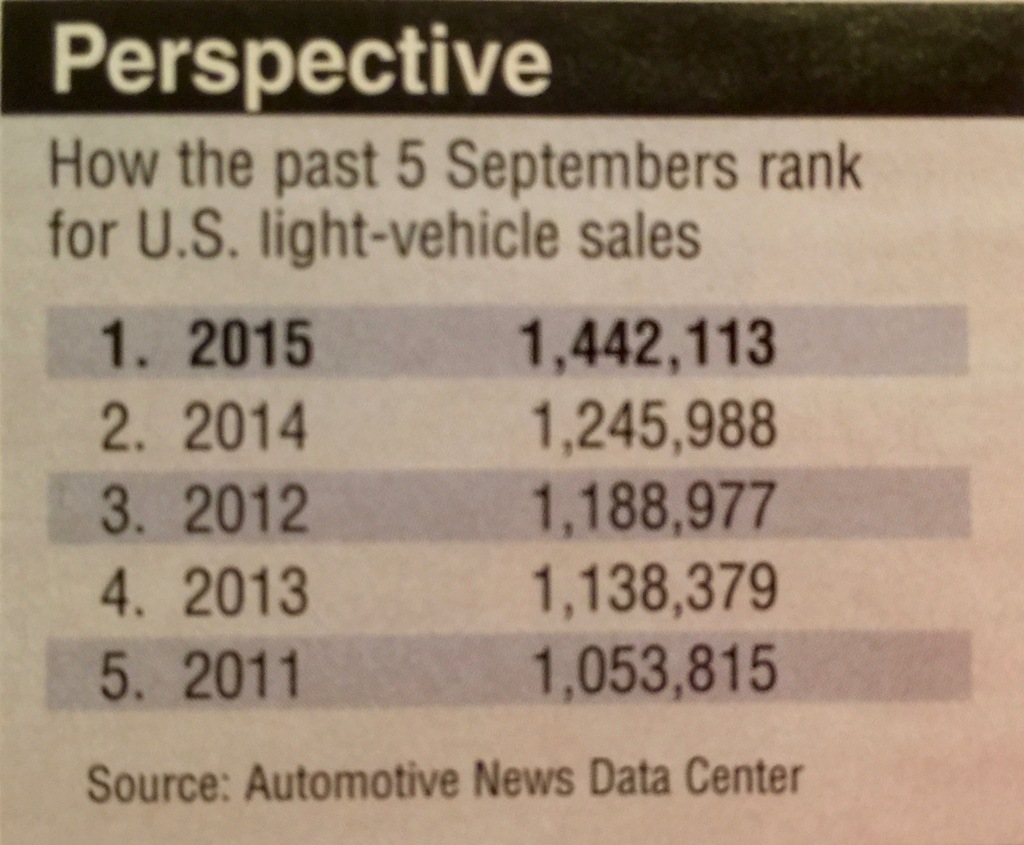 There is no way around it... September 2015 was one of the best Septembers in the history of the car business... Not only was the volume there, but gross profit margins went up as well!

The American auto industry's sizzling sales pace this past summer shows no signs of abating, or having quenched car buyer demand. U.S. car dealers are generating record setting sales numbers without excessive rebates, no-gross giveaway deals or many of the other sins of the past.

Car Companies aren't making the old mistake of overproducing, hence the reduction in sales to rental-car fleets... And, there is certainly NOT a trend towards jamming dealers with excess inventory or undermining car buyer confidence with excessive incentives. In fact, gross profits and transaction prices continue to increase despite the sales volume increases. And if anything, dealers are asking for more inventory, rather than running away from new vehicle allocations.

I just got off the phone with Kevin Ruttenbur, dealer at Warren Midtown Motors in Pennsylvania and his store had the best September in the dealership's history. He told me how busy his team is and how important digital marketing and sale fulfillment have become to his Ford dealership. Kevin echoed what so many other dealers have told me, their sales are only limited by their ability to acquire the hot and in-demand inventory that customers are seeking out online. 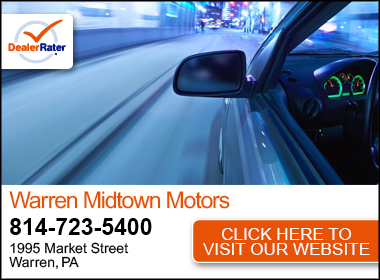 Anyway you slice it, September was a car sales barn burner!

New-vehicle sales roared with an overall increase of 16 percent... Y'all sold 1.4 million cars and light trucks. Yes, it was a great Labor Day Weekend this year, combined with the continuing American car buyer demand for more trucks and cross-overs.

Ford led the top volume brands with a 23 percent overall sales increase for September. Toyota, Nissan, Honda, Fiat-Chrysler, and Hyundai-Kia each increased their sales over last year by 13 to 18 percent. General Motors was able to show a 13 percent sales increase, but that was hit by a drop in fleet sales (good riddance). GM's actual retail sales volume climbed by 17 percent, when fleet sales are removed from the mix. 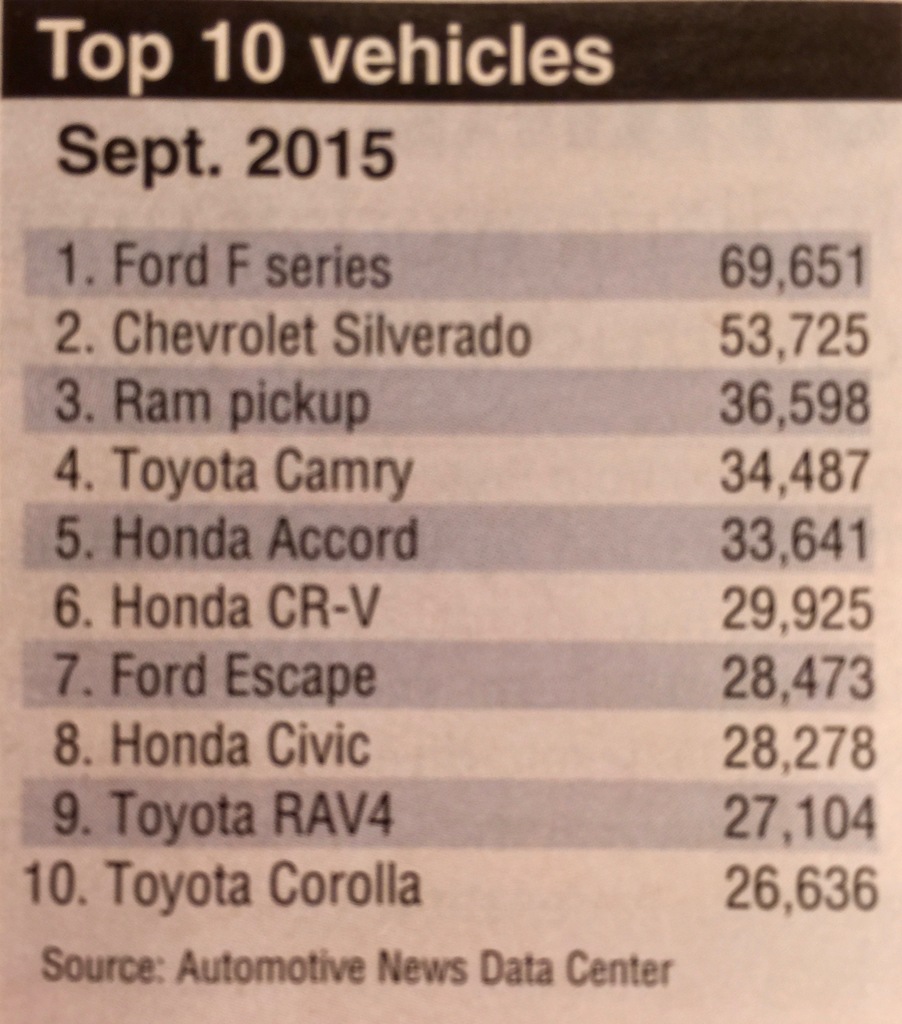 Despite their bad publicity even Volkswagen sold 26,141 vehicles.

That's 145 more than a year ago, regardless of being forced to stop selling 2.0-liter diesel models amid its emissions scandal and their German leadership shake-up.

Torrid is an understatement... September beat August's 17.81 million and generated the highest SAAR level since July 2005, when employee-pricing promos drove SAAR to 20.64 million.

Besides the great job that America's car dealers are doing, record level rates of sale reflect the strength of the American economy and the healthy conditions auto manufacturers and their retail networks have created in the wake of the 2009 Recession.

He noted that almost all drivers are working in the industry's favor -- gasoline prices and interest rates are low; housing starts, consumer confidence and the age of vehicles on the road are up.

Big gains such as September's no longer can be explained by one-time factors such as calendar quirks or new-model launches. LaNeve and other industry executives said sales were brisk all through September.

"It was more than Labor Day," LaNeve said.

In fact, the SAAR has hit or exceeded the 17 million mark for five months in a row now, a feat last accomplished when the industry enjoyed a 12-month streak from July 1999 to June 2000.

Overall, truck sales rose 24 percent last month and made up 58 percent of total sales. Just two years ago, trucks made up 50 percent of the market. The rapid shift is putting strains on manufacturers.

GM and Ford said they generally are satisfied with their inventory levels, but Toyota expressed concern about supplies running low. While the Toyota brand's car sales increased 19 percent in September, it reported that sales of the recently redesigned Tacoma midsize pickup fell 3.2 percent and the larger Tundra saw a 7.9 percent drop.

With the SAAR running above 17.5 million for four out of five months...

"there's going to be gaps in every manufacturer's lineup," Bill Fay, general manager of Toyota Division, told reporters on a conference call. "When the market shifts that much, we're all reacting the best we can."

Perhaps as a further exclamation point on how the industry seems to be firing on all cylinders, even Scion saw a big gain. Scion had reported sales decreases 27 months in a row. But the new iA and iM drove volume up 57 percent in September to 6,510 vehicles. 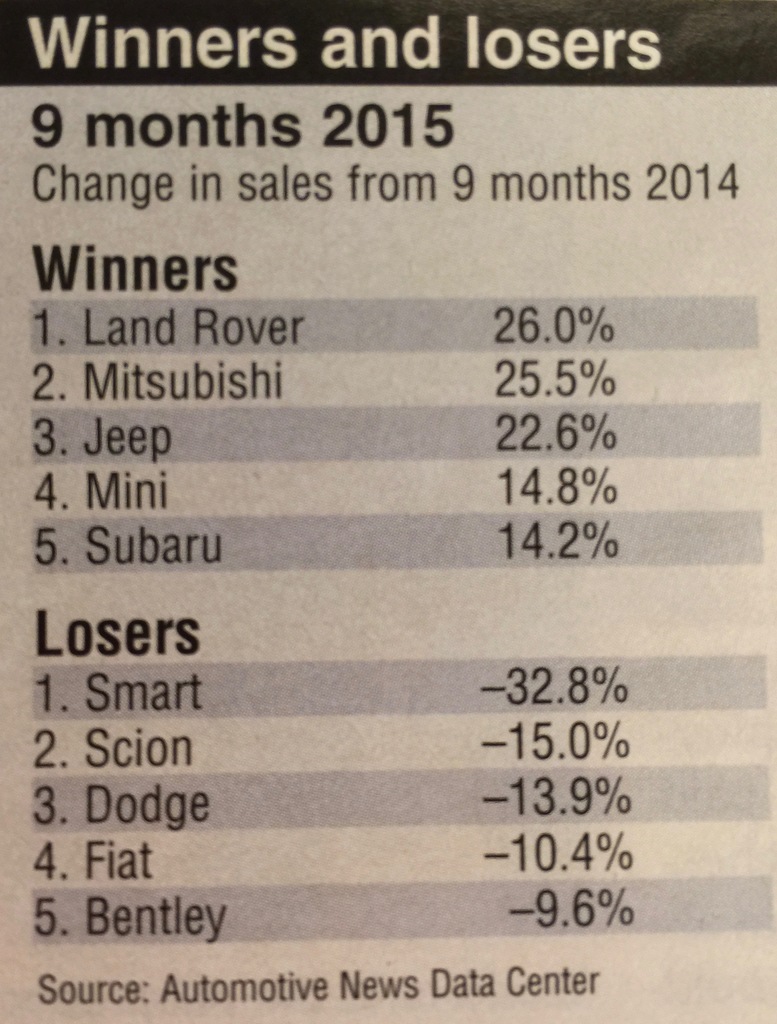