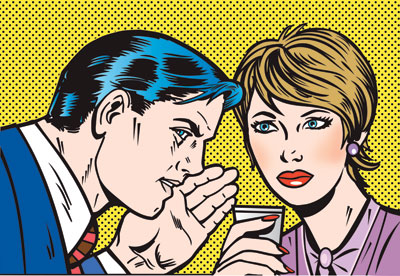 78% of Americans aged 18-64 agree that online reviews help them decide whether or not to purchase from a specific business, including dealerships. This includes roughly one-third who "very much agree", according to survey results released in December by Ipsos Open Thinking Exchange (OTX).

Compared to the global average of 69%, American consumers, including car buyers are 13% more likely to agree that online reviews, including dealership reviews posted by customers, influence their selection of products and retailers, including which car dealer to do business with.

*These statements represent the firm beliefs of the author (Ralph Paglia) and are supported by the data cited in this article and many other reports including research done by Dealer.com and The Cobalt Group.

In fact, the Ipsos results might even underestimate how influential both business (dealership) and product (vehicle) reviews are to Americans. An online survey of 407 US adults by EXPO, also released in December, reveals that 98% of respondents found user-generated reviews helpful when doing online research related to their shopping for all products, including new or used vehicles, and which local retailer (including car dealers) to purchase from. 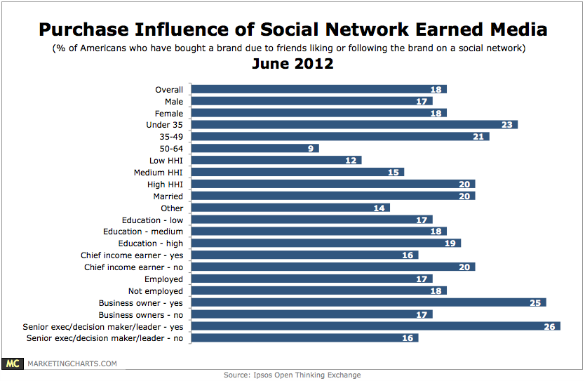 Returning to the Ipsos results, certain segments of the population appear more reliant on reviews than others. Within the US, women are almost 50% more likely than men to say they very much agree that online reviews and ratings, including car dealership reviews, help them decide which retailer (car dealer) and product (vehicle) to buy (38% vs. 26%). There is also a strong age dynamic at play. Specifically, the 18-34 group is far more likely than the 35-49 and 50-64 sets to very much agree that product and business reviews, including online dealership reviews influence them (44%, 32%, and 19%, respectively). When factoring in those who “somewhat agree,” the gaps are less pronounced, with 84% of the 18-34 bracket, 82% of the 35-49 bracket, and 68% of the 50-64 group agreeing at least somewhat that they are influenced by reviews when selecting products and retailers (including car dealerships) to buy from, including make and model of vehicle to purchase.

Interestingly, online business (including car dealers) and product reviews appear to be more of an influence to wealthier Americans than to their lower-income counterparts. Survey respondents from high-income households were 23% more likely than those from low-income households to agree (at least somewhat) that online reviews help them decide whether or not to buy a particular product (including vehicles) from a specific retailer, including car dealerships (81% vs. 66%).

Similarly, respondents with a high degree of educational attainment were about 11% more likely than those with a low education level to rely on customer generated online reviews of products and businesses, including both vehicles and car dealerships (83% vs. 75%).

Asians Highly Influenced by Reviews; Europeans Not So Much

The Ipsos study examines the attitudes of consumers across 24 countries, and finds that those most open to being influenced by online reviews are almost all Asian countries. Turkey (a Eurasian country) sports the highest proportion of online consumers agreeing that they rely on product and business reviews, at 92%. That includes an impressive 58% who very much agree that those reviews help them decide which products to buy, and what retailers to buy from. Turkey was the only country in which a majority very much agreed with the influence of product and business reviews – the next highest was India, with 44%.

After Turkey, a high proportion of consumers in South Korea (89%), India (87%), Indonesia (86%), and China (82%) are influenced to some degree by online product and business reviews.

Those high figures contrast with countries at the other end of the spectrum, whose consumers appear to largely ignore online product and business reviews. Those countries – exclusively European – include France (38% at least somewhat agreeing), Belgium (39%), Sweden (43%), and Germany (47%).

Regionally, the Asia-Pacific sports the highest percentage of consumers relying on product and business reviews (80%), while Europe has the least (56%).

Screen capture from a page from within the Cobalt Group's eBook on the Street Smart Guide to Automotive Reputation Management for Car Dealers: 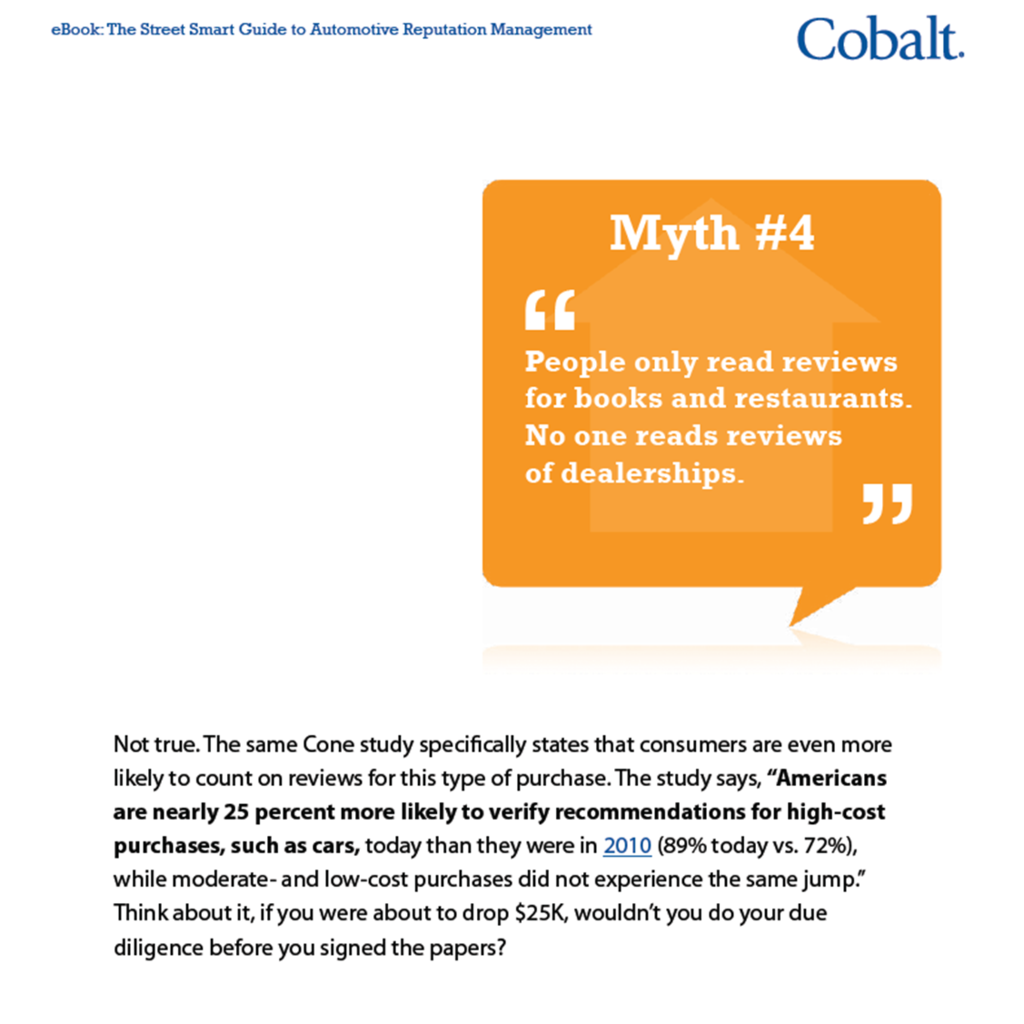 Screen capture of a page from within the Cobalt Group's eBook on the Street Smart Guide to Automotive Reputation Management for Car Dealers: 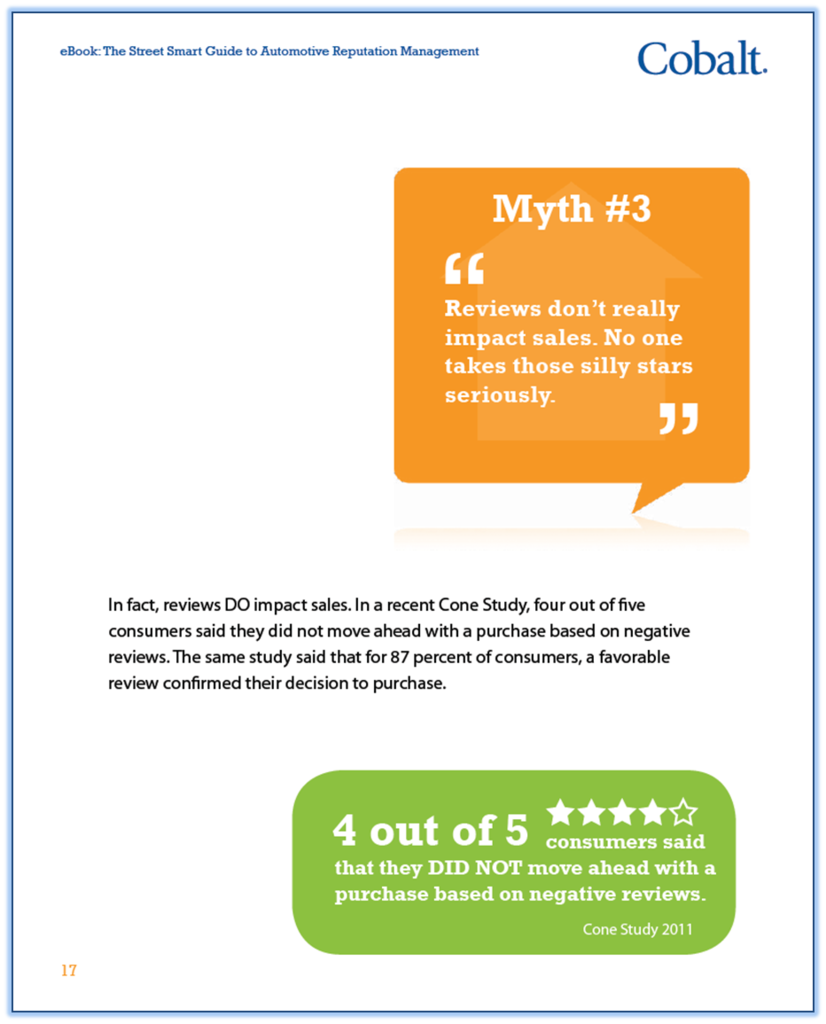 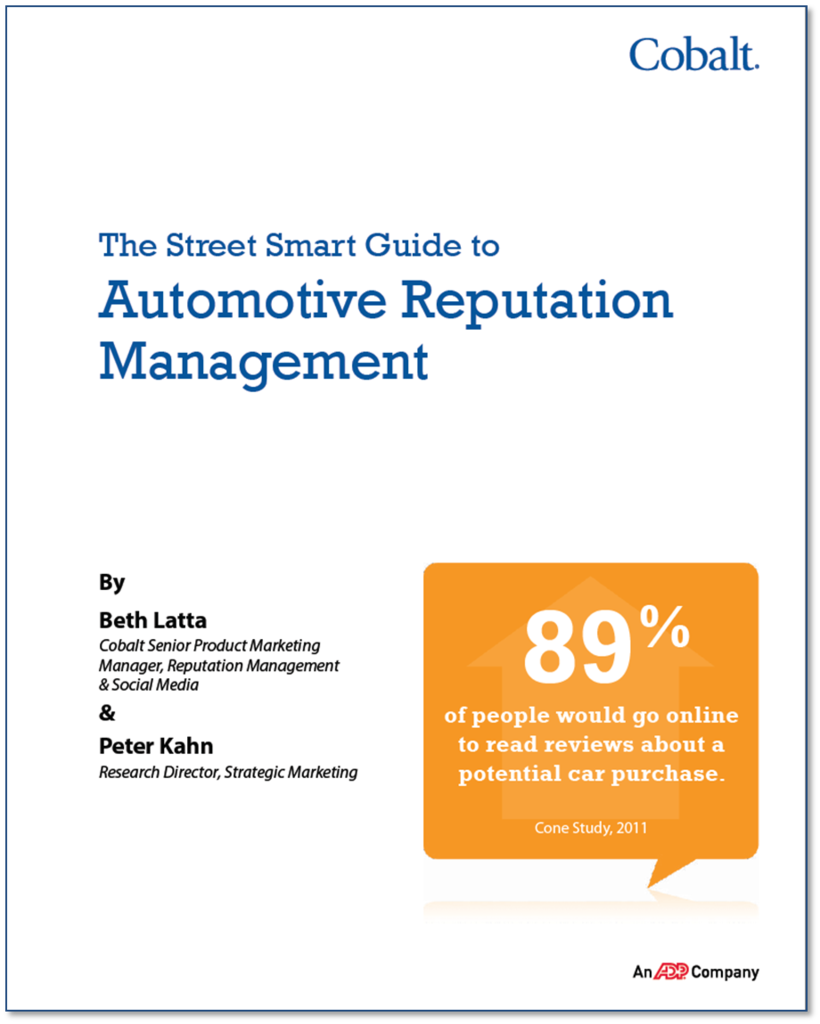 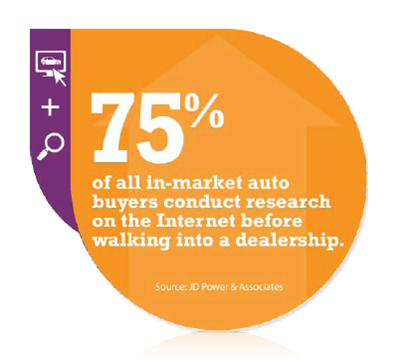 The study, entitled The Rise of Loyalty, Advocacy and Influence: Social Media and the New Automotive Buying Cycle, examines how social media influences different stages of the car shopping process among nearly 2,000 consumers who had recently purchased a new vehicle or were looking to purchase one within the next 12 months.  The study also explores the impact of consumer advocacy on loyalty. Findings from the study point to early signs of a trend that social media will progressively grow in influence as people increasingly turn to it as a shopping resource. The study also finds that social media use among consumers who consider themselves loyal to at least one dealer or manufacturer is higher than those who have no loyalty, underlining how critical it is for dealers and manufacturers to build, nurture and maintain positive relationships with their customers after they drive their new car off the lot.

"We are witnessing the evolution of the automotive purchase cycle, which takes into account the rapidly growing influence of social media on the car-buying process," said Kevin Root, Chief Product Officer of Dealer.com, who directed the study. "Dealers and manufacturers need to recognize the importance of this new person-to-person marketing phenomenon, where the advocacy of others is increasingly more valuable to consumers than traditional marketing. By making social media an integral part of the marketing mix, they can turn customers into loyalists and advocates, and through them, favorably impact decisions of others about what car to buy and whom to buy it from."

Significant findings from the study include the following:

Brian, on a separate note, you referenced my article critical of John Reed which you apparently no longer have access to... I turned it private after being shocked and disappointed by the over-reaction of one particular person whose opinion means a lot to many people.  Since it was my article, not someone else's, I have the right to take it private, which I did.  I always kind of liked John reed and the words I wrote must have been poorly chosen because it was never meant to be hurtful, just pointing to a track record of making promises around DMS that did not come to fruition.

With that said, I will make my own prediction for 2013 which i know will come true:

MORE CAR BUYERS WILL CHECK REVIEWS ON VEHICLES AND DEALERSHIPS BEFORE THEY MAKE A PURCHASE IN 2013 THAN THOSE WHO DO NOT DO ANY CHECKING.

Hey Brian - I stand by my opinion that the majority of American Car Buyers are using online reviews, ratings and evaluations written and posted by people that don't work for car companies and car dealers.  I speak to enough car buyers to know this is true.  As for the data, if the majority of people say they are using online reviews to determine the products they buy and where they buy them from, why would anyone think "except for new and used cars"?  If anything, the trepidation, low purchase frequency and high price points would point to a trend of people using online reviews MORE for car dealers and vehicles than for other products...

I know many people who do not work in the car business and 100% of them do online research that includes reviews and customer ratings before they decide what and where to buy a vehicle.  I certainly don't look up reviews to by a box of Triscuit crackers, or toothpaste, or any other small ticket items... I do use reviews, as do most Americans for things like cars, dealerships, hotels, airlines, Televisions, Computers, Refrigerators, or anything else that costs over a thousand dollars...

In my opinion, based on countless market research reports and speaking, responding to and communicating with thousands of car buyers; NOBODY goes out and buys a car today without checking some sort of reviews or customer ratings of the product and the retailer.

Maybe i am crazy, but what the heck products do people check reviews and ratings on if not for cars and dealerships?