Check Out The New MySpace! 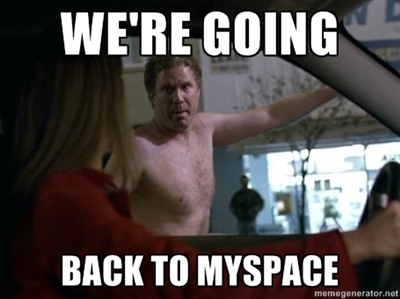 Facebook has become so entrenched as the social media leader, it’s difficult to imagine any new threats emerging… but what about old threats?

What about long forgotten ancients, stirring from their slumber and rising from the sea to reclaim their throne? In the world of social media this may be happening right now.

Well, it turns out sexy isn’t the only thing Justin Timberlake is bringing back.

How do they plan on competing with modern juggernauts like Facebook and Twitter? Well, for starters they have adopted a truly genius registration system (adopted, not invented, this I promise you.) Basically, they’re going to let users register on MySpace using their accounts from other social networks. This does two things exceptionally well.

First, it lets users test the waters without going through some pain in the butt, everything I own, form submission, which will make people more willing to give it a shot.

Secondly, the account info from the other social networks will be automatically imported to Myspace; this will likely include friends lists, enabling a relatively painless conversion to a new form of social media.

This isn’t Tom’s MySpace though. The social network has received and aesthetic and functional facelift courtesy of it’s new ownership. The new site is heavily focused on visuals, much like Pinterest, but its look seems to be a little sexier than the Pinterest’s board format.

Will anyone care? That remains to be seen. In the meantime, check out their video showing off the new site.

Original article about the new Myspace posted on Wikimotive's blog under the title Myspace Has a New Look!

Tom - That's a great question... I would have never considered the Music Type Profile, but maybe if that is set up for a band it might be appropriate for a business... Any ideas on this issue? Would it be better to use the Personal or the Music Profile for a dealership?

I just tried to log in & to my surprise I still have a myspace!

Ralph...would you use the personal or music profile?  I suppose personal and try to split your business name between first and last name field??

From Current Issue of Advertising Age:

Some Critical Acclaim, But Will It Matter?

Now owned by an ad network and backed by Justin Timberlake, Myspace is getting a redesign that -- dare we say it -- is making Facebook look like it was designed by a kid in a college dorm room.

As others have pointed out, it's borrowing a lot from Pinterest and Windows 8, but mostly it just looks fresh, original and interesting, despite the gratuitous profile pics of Mr. Timberlake.

The design and function is attempting to appeal to the last known segment that still pines for the Myspace of old: the music industry. The company's label deals are still in place, and it scored a coup yesterday when a judge ruled that Apple couldn't trademark its music icon because it could confuse consumers with the one for Myspace.

To achieve its slick new look, Myspace tapped a fairly under-the-radar (in the U.S. anyway) outfit called JosephMark that's based in Brisbane, Australia. The shop, which describes itself as a brand and digital-development agency, was founded in 2004 and has since also opened an outpost office in New York.

Its co-founder, Ben Johnston, has quite the entrepreneurial streak and has also founded a slew of other companies, including creative shop Gilimbaa, digital-innovation shop Native Digital, and motion-design studio Breeder.

For all the mocking Myspace has gotten over the past few years, it seems tech pundits are now in awe of the platform's redo.

Wrote Wired's Ian Steadman: "Once-dominant now-withered social network MySpace has returned with new owners and a new design -- and, in all honesty, it looks pretty cool."

Then there's @beavisandbutthead: #IGotDrunkAnd Signed onto Myspace for the first time in 4 years.

If Specific Media can bring Myspace back from the dead, it would be a first. That said, other troubled web giants (er, Yahoo) should have a look at what they've done here. What do you think? Awesome but irrelevant? Too little, too late?

Tom - You may get different opinions, but I recommend creating a separate profile for your business and keep all content and activity focused on information, images, radio spots, videos, etc. relevant to your business... Having done setups a variety of ways, every time I have mixed personal profiles with business, eventually we always wish we had started with a fresh profile for the business... This does not apply to Facebook which is a whole different animal!

What is the best way to get your business listed on myspace.com?  Add the business to your personal profile or create a separate account for your business?

It's beautiful & cool.  Nice way to show off inventory, happy customers.  With Timberlake at the helm, this will appeal to a younger car buying audience.  Great way to repurpose FB and Pinterest content.

I've been using MySpace.com for over 8 years on a steady basis... http://www.myspace.com/ralphpaglia Most of the content I post or syndicate from ADM, dealerELITE and other automotive networks gets posted to my MySpace profile page (including the above article from Tim Martell).  This is a network that although toppled from its heyday, still has over 200 million active users.  When Specific Media bought MySpace, I was engaged in daily business activity with Specific Media and was asked to assist in their redevelopment of the music application for MySpace, which I did... By no means would I recommend ignoring MySpace as one of the social networks included in a car dealership's social media marketing strategy.  A few observations, MySpace works exceptionally well for uploading and sharing videos... Not that it will replace YouTube, but MySpace videos seem to show up prominently in Google search results (SERP).  Also, MySpace has user friendly content syndication and positing applications and API's so apps like "Add This" work exceptionally well, pulling over images and the article's first paragraph.  Also, if you are into music, MySpace has more songs available than iTunes, Rhapsody and Spotify!