Auto News just posted a pretty cool article on our dealership. Please check it out and tell me what you think! Here's the link...

Those of us that have known you for awhile know that this is one more in a long series of journalists discovering you and your dealership operations as a newsworthy topic because of how well they are managed and your leadership... You have accomplished a lot more than simply embrace the Internet for your own business purposes, you have been an Auto Industry Digital Marketing leader in thinking, strategy, practices and tactics for more than 12 years, that I know of on a first hand basis. Your early success and the articles published in the Wall Street Journal many years ago about what you had been able to do with a "ma and pa" dealership that rarely sold 20 cars in a month, served as an inspiration for automotive consultants like me and Danny Alkassmi, as well as hundreds of other dealers around the country, including your friends Doug, Dave and Chip Waikem.

This article is great to see and read, and I applaud your success and perseverance more than most... HOWEVER, in my own semi-cynical manner, it sort of pisses me off that there are not more journalists, writers, dealers and so-called "auto industry gurus" to have taken notice of what you were part of creating in the latter part of the 90's while on the board at Autobytel, founding iNet and taking a sleepy little Dodge store in a small southern MI town and turning into a regional sales force to be reckoned with... Using Internet marketing and sales process to drive the vast majority of your sales volume... To me, the story of Tom and Fred Vann, and the Team Hillsdale Dodge phenomenon merits a book, not just an article in a weekly publication...

But, I am ALWAYS glad to see you get at least a little bit of the recognition you deserve! And, I get a kick out of figuring out how to repurpose your cool Flash animated header out of Cars.com, which is supposedly impossible, but there it is at the top of this comment...

Dealer's use of Web turns Main St. into high-sales highway

Written by David Barkholz
Automotive News
HILLSDALE, Mich. -- Chrysler Group dealer Tom Vann embraced the Internet as a sales tool nearly 15 years ago, when the technology was still a novelty.

He's sure glad he did.

Because nearly 70 percent of his car sales today come through the Internet, it doesn't matter that Vann's Team Hillsdale Chrysler-Dodge-Jeep is tucked into this small, predominantly farming hamlet deep in south central Michigan.

"We saw a long time ago that we couldn't just focus on our Main Street business," says Vann, 45, whose father, Bill Vann Sr., was a longtime dealer in nearby Albion, Mich.

The surrounding county has been losing automotive and tool-and-die jobs for the past decade. Unemployment in Hillsdale County, population 46,500, was 17 percent in September, according to the state of Michigan.

But Team Hillsdale has been largely immune to the slide. Vann's average online buyer comes from 120 miles away. His biggest market is the heavily dealered Detroit area, 100 miles away.

Vann's sales territory ranges approximately from the border with Ohio and Indiana to the south, Lansing to the north, Kalamazoo to the west and Ann Arbor-Detroit to the east.

But sales eroded in the fourth quarter to about 30 a month. Vann says customers have lost some interest in Chrysler vehicles since the company failed to provide dealers enough cars during the cash-for-clunkers program this past summer.

"It was a moment in time that the company couldn't take advantage of," Vann says.

Tom Vann has co-owned Team Hillsdale Chrysler since 1986 with his brother Fred. A third brother, Bill Jr., owns a Ford dealership in Albion.

For years, Tom stayed away from the business because he objected to the high-pressure sales techniques that he saw at his dad's stores while working there during college summer vacations.

"One of my first days on the job, I spent an hour helping a guy, walking around with him and answering all his questions," Vann recalls.

"A senior sales guy pulled me aside and chewed me out with a stream of expletives, telling me how that customer would never buy a car that day and he was wasting not only my time but the store's as well."

"I didn't even last the summer. I realized that day that I couldn't play that sales game."

In 1995, Vann returned to Hillsdale. By then he had spent nine years in the restaurant business in the San Diego area, first learning about and then training employees how to please customers at the high-end restaurants he managed.

Vann discovered a new, entrepreneurial company -- Autobytel Inc. -- that could provide solid sales leads to dealers in the hinterlands because of information it got from the Internet car-buying searches of prospective customers.

It was a dream come true for Vann. He could take the leads and sell comfortably to customers over the phone without ever watching them hesitate and squirm on a car lot.

Within weeks, Vann sought and secured an Autobytel commitment for most of lower Michigan.

It has been a long run since then. In the past 11 years, Team Hillsdale has sold about 8,000 vehicles over the Internet, with 7,000 of those purchased sight unseen. Vehicles are delivered to customers' homes or offices.

Vann says another wrinkle has been instrumental in creating a pain-free buying experience: Team Hillsdale allows buyers three days to return the vehicles, no questions asked.

Vann says that's possible, without the car being designated as used, because buyers do not need to sign a state form for transferring title until the three-day test drive is complete. Vann throws in a $50 dinner certificate so buyers can experience what it feels like to drive up to their favorite restaurants in the new vehicle.

If the buyer wants the car, as is almost always the case, Team Hillsdale will send a representative out to the buyer to sign the title form. If the answer is negative, the dealer brings the car back on a trailer.


"We minimize the risk of purchasing the car -- that fear in the customer that they'll regret the deal the next day or they'll drive off the lot without the navigation system or accessory they really wanted," Vann says.

Vann keeps tinkering with his Internet operation to try to coax customers back. He recently added a pop-up on the company Web site featuring a perky college girl. She invites viewers to navigate the site and contact the dealer when they're ready to take the next step to buy a new or used vehicle.

Kelley Blue Book in Irvine, Calif., made Vann president of its dealer advisory panel when it was created four years ago, says Michael Romano, Kelley's senior vice president of dealer strategy. Vann has used the Internet to bring consumers the convenience and breadth of information they require when making buying decisions, Romano said.

Vann says he also dabbles in so-called microsites such as jeepgeek.com, which he is developing to espouse the thrills of driving Jeeps off-road. Those sites then can direct viewers to the dealer site.

He remains a believer in third-party lead generators such as Trilogy Enterprises Inc., of Austin, Texas, which are good at rating the chances that an individual will buy a vehicle within a designated period of time.

"With the Internet, consumers are in a position to make buying decisions without undue influence from us dealers," Vann says. "Our message today has to have the tonality of friendship without the assumption of friendship." 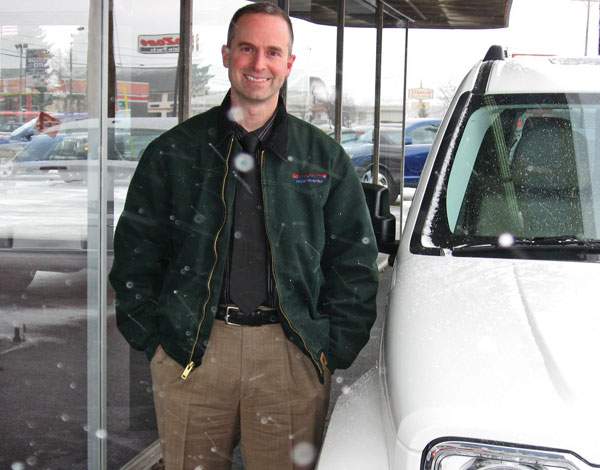 Nearly 70 percent of the sales at Tom Vann’s Hillsdale, Mich., dealership come through the Internet. Over the past 11 years, about 8,000 vehicles have been sold online -- where, unlike the lot where this photo was taken, it never snows.

Influencer Comment by Dan Rutledge on January 7, 2010 at 4:00pm
Tom;
Congratulations on an awesome article. As an ad agency guy that has spent the last 5 years dragging dealers kicking and screaming into the internet, it is reassuring for me to see someone who recognizes and is utilizing the full power of this medium. If you're ever looking for high quality, affordable web video I would be honored at the chance!