There is a statement we've all heard over the years in the car business.  It usually comes from the dealer or a senior manager.  When I hear it, it makes me crazy.  Now, I know that some of you will say that driving me crazy is a short trip, but this one makes me glad that I'm not on a roof when I hear it.  I might jump.

It usually happens when I'm talking to a dealer.  We may be discussing a hiring campaign, an idea for advertising, a specific sales practice or even a way to cut…

Warm Bodies Are Not Enough

Part of our marketing is to monitor help wanted ads for sales people.  I've seen some that should be very effective, but far too many are less than acceptable.  The only way to describe them is pure laziness.  The only other possibility is that the dealer is still running the sales department on "The Warm Body Theory."  That's where dealers who are stuck in the 1980's still believe that if they keep hiring warm bodies, eventually they'll end up with some "natural" sales talent.…

I just returned from my nephew's wedding.  He is the first of our family's next generation to marry so the pressure was on to create a standard to follow.  Being my brother's son, I was excited to go, visit with family that we don't see often enough and most importantly, to honor my nephew and his new bride.  From the rehearsal dinner to the church, and ultimately to the reception, it was perfect.

Not just for all it had.  It was perfect for the things that were…

How To Hire The RIGHT Vendor

You've decided to go outside your dealership to get something handled.  After a lot of thought, you realized it would be better to spend money with the right experts and handle things once, than to save money on paper and take your people away from what they do best for you.  Many times that's exactly what you should do.  But how do you know you have the right company for what you really need?

To help you see how to rate a company or service, I will be using our company…

January 1979 I sold my first car at a small dealership in North Jersey.  Since then, a lot has happened.  I've personally trained over 15,000 sales professionals, written 10 books, spoken literally around the world, and now work with top dealers to fill their sales needs.  I have seen and participated in three "worst ever" downturns in our industry.  Each has taught me lessons on how to deal with the struggles and what to improve on as business gets better.  There was one lesson that…

All this technology is becoming very popular around and among dealers.  Sales people can pull up apps and show customers all the details about a particular car in stock.  Customers can shop and research before they get to the dealership, and an Internet staff can track web visits and initiate contact with potential customers.  All at the speed of light.

Thanks to the innovation of Steve Jobs and Apple, we can "i-anything" we want.  But there is one important ingredient to…

Addy's Harbor Dodge in Myrtle Beach, SC has just jumped into the top 5 of all Dodge dealers in the US.  It just shows that having the right programs, the best managers and top sales people, will make great things happen.  We are pleased at this great dealer's success and even more thankful that we have been along for the entire ride.

When we first came to Addy's they had 8 sales people and were doing average numbers.  Rod Ricciardi had just become the GM and brought with him a…

The Difference Between A Professional And An AMatuer

As we reach the mid year time, many of us make decisions.  Some even make commitments to change certain aspects of their life and their profession.  Unfortunately, far too many change absolutely nothing because they believe that their career is subject to the mercy of the markets.  They boast about how they were a top producer during the market high points, and continue doing the same things they did when customers simply showed up with checkbooks in hand.

When Is The Best Time To Hire?

You've evaluated the numbers.  Met with your managers.  Decided the goals for the rest of the year.  Now the only question is, how and when should you hire additional sales people?  Is there actually a best time to put new people on your floor?  Let's look at the possibilities.

HIRING WHEN THINGS ARE SLOW

When things are slow there are two huge benefits to hiring new people.  First - You cna take your time and make sure they get their feet under them.  Let them…

The Process Is The Prize

The Process Is The Prize!

Studies show that the average salesperson is into negotiations within 3 minutes of saying hello.  Three minutes and they're talking numbers and hoping to close a deal.  What's amazing is, I heard that exact statistic when I went to my first sales training seminar in 1980.  So, nothing has really changed in over 30 years.

Think about it this way.  Some of you have been reading this newsletter since it began.  That being the…

You arrive at your dealership and notice that the outside is appearing a bit drab.  To fit with the brand and the neighborhood, you determine that a great paint job would do wonders for the entire building.  So, you make the decision.

Here are your choices:

•You call the top commercial painters in the area and get an estimate.

•You hire a couple of college kids give them a truck to pick up paint and turn them loose. 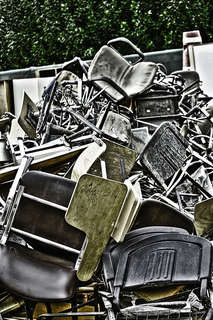 There is a statement we've all heard over the years in this industry.  When I hear it, it makes me crazy.  Now, I know that some of you will say that driving me crazy is a short trip, but this one makes me glad that I'm not on a roof when I hear it.  I might jump.…

Be Afraid - Be Very Afraid!

What a year we've had.  There were ups and downs, but I'm so looking forward to next year.  I had the privilege of working with enough dealers to see an even bigger need for training in 2012.  But, my challenge is not that I see it, but getting dealers to see it as well.  As many in my industry know, the most common objection to training of any kind is that the dealer has it handled.  They just don't see a need.  In my opinion, many of them just don't see!