What the New Facebook Message Platform means to Business

Here is some info on the New Facebook Message Platform:

Auto Dealer Electronic Uplist The Next Up® Reaches Milestone of 100 Installations; Growth based on Results and Word of Mouth

Auto Dealer Electronic Uplist The Next Up® Reaches Milestone of 100 Installations;

Growth based on Results and Word of Mouth

Anaheim, CA, March 7, 2011 – The Next Up®,  an electronic uplist designed to manage the sales activity of automobile dealership… 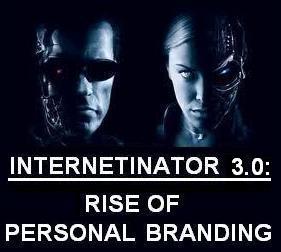 There’s a new sales strategy coming on the horizon:  Personal branding of salespeople.  Not branding of a dealership, but of a salesperson, on the Internet and beyond.

First, let’s reflect what dealerships have long worried over, and tried hard to control:  their salespeople’s interaction with customers.  After all, dealerships provide phones, computers,…

CRM: Why a Good Internet Lead Manager (ILM) is Essential to Making the Most Sales!

When reviewing a Customer Relationship Manager (CRM) for your dealership, the operation of the Internet Lead Manager (ILM) as part of your CRM software is essential to achieving your best Internet sales--regardless of whether you operate a BDC, an Internet Department, or cover your Internet leads with an “Internet Dealership” approach where any sales consultant can…

Know a direct mail campaign is the answer to your marketing woes, but stumped about where to start? We’ll help you learn the basics of an effective marketing strategy.

If the saying holds true that the shortest distance between two people is laughter, then it’s likely that the marketer who fearlessly goes for the jocular stands a better chance of disarming today’s increasingly knowledgeable and sophisticated consumers.

Calling All Fiat Dealers in USA 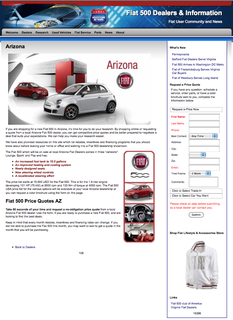 If you have been awarded a Fiat franchise, I would like to offer a free dealership profile page on www.fiatdealer.org.  This website has strong search visibility nationwide.

After recent years of diminished luster among some automotive marketers, sales and service customer prospecting appears to be striking gold once more.

A TALE OF THREE SALESPEOPLE

This is a true story told to me in 1996 BC (Before Computers) by my friend sales trainer extraordinaire Diana Ball Cooksey. (http://www.dbcooksey.com/)

Diana was a busy working professional and single parent with little time for projects outside her day-to-day work and home responsibilities.  But she needed to buy some health insurance.  So she left voice messages after hours (this is the days before PCs, remember) with three agencies,…

The Truth About the Sales Results of (any) Advertising!

For dealerships, how do you determine the true sales results of any advertising?

This is a real story about resolving that last question--it involves direct mail, but follow along because it applies to all dealer advertising:  The GSM at a dealer in a five-location dealer group in another state challenged the direct mail results he was given on a new/pre-owned direct…

I don't want to shamelessly self-promote myself (I'm only on page 4 of this brochure), but check out my great session--as well as all the other great sessions!--and CRM panel at Brian Pasch's upcoming April Bootcamp (www.automotivemarketingbootcamp.com).  It would be great it you attend!  The bootcamp is just before Digital Dealer 10 in Orlando (but NOT associated in any way with…
Continue

7 Surefire Signs Your New Facebook Friend is a Fake,,,It happened on MySpace, it's only expected.

I copied a great article written by Nick O'Neill....

It's amazing how many people have called to ask about the JC Penny and Overstock.com SEO scandal. Let me assure you that anyone who has taken my Automotive SEO classes or attended my workshops, the strategies that these unnamed SEO companies implemented is NOT anything I would have recommended.

I made a video to help car dealers understand that good…

The online video market continued to gain momentum in 2010, with an average of 179 million Americans watching video each month,…

In addition to providing new vehicle shoppers with adequate information that is easy to access, the most useful automotive brand websites must also provide a consistently satisfying experience across all points of entry, including the home page and…

I wanted to let everyone know about an upcoming Digital Dealer webinar on March 17, 2011 at 12pm EST/9am PST with Larry Bruce.

You know you need to do it. But managing your reputation online has always seemed…

According to a recent cell phone study by Pew Internet, “85% of Americans ages 18 and older own a cell phone, making it by far the most popular device among adults” and a great opportunity for car dealerships to utilize for automotive mobile marketing purposes.  Not too surprisingly, the study also found that a great deal of time spent on a mobile phone has nothing to do with…