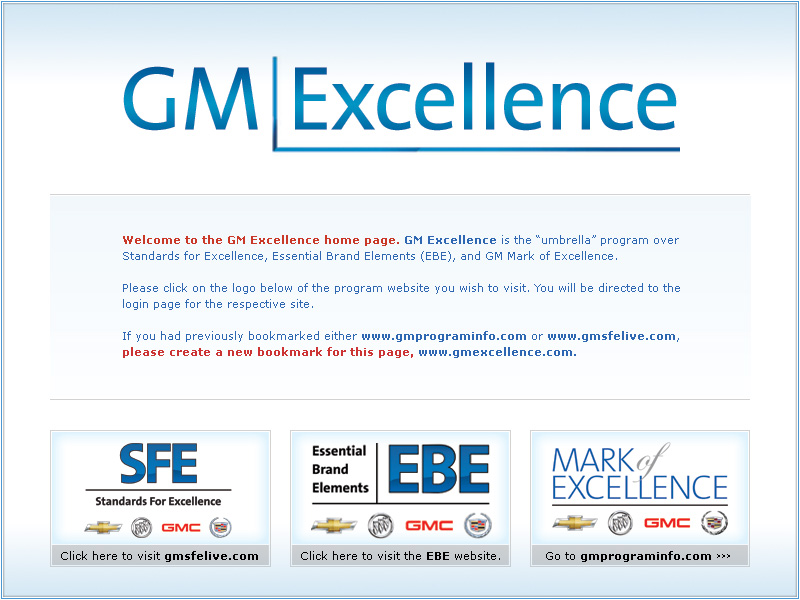 GM Will Push Dealers to Upgrade

To shine its image, General Motors has launched a new ad campaign to show its cars are as good as imports, and it put in place 60-day money-back guarantees. Next up: sprucing up its dealerships.

Starting on Oct. 1, GM will begin a program called Essential Brand Elements, aimed at pumping money into dealers that bring their stores up to snuff. Many of GM's dealers have been around for decades and are paired up with an import-brand store, have old showrooms, or are in the wrong locations. GM is already mandating that its dealers split and relocate their import stores to another site. Now any dealers willing to invest the cash to update their showrooms to GM's new standards can get big payouts every quarter, according to several dealers briefed on the plan.

GM Chairman Edward Whitacre, CEO Fritz Henderson, and Vice-Chairman Robert Lutz met on Sept. 9 with the company's 15-member Dealer Advisory Board and the company's sales and brand heads, where they were told about the plan. The goal, says California Buick-GMC and Cadillac dealer Leo Bunnin, is to put dealerships in better locations and decouple some of them from other stores selling imported brands on the same patch of land. "The facility issue is an immediate issue," says Bunnin, whose dealership group is based in Ventura, Calif. "Some dealers have been restrained by being in an old, small metro toilet."

Starting on Oct. 1, GM will send inspectors from an independent firm to the dealerships to see which stores should move, upgrade, or separate their showrooms from an import brand. Dealers have to submit photos of their stores for evaluation. They will have two years to move if they need to be in a different location within the market, a year to upgrade facilities, and four months to split away from an import store.
Cash incentives for upgrades

If dealers comply with the upgrades and meet GM's suggested standards, they will get cash payouts every quarter. The money could be substantial—several hundred thousand dollars for a dealer with a high-volume store that makes significant improvements.

Bunnin says GM also wants each brand to have common signage and a nicer reception area. The plan is to give GM's dealerships, some of which have been in existence for decades, the same fresh feel as import showrooms built in more recent years by foreign brands that have been expanding in the U.S. market.

The plan would move some dealers from areas with lower retail traffic to a better area within a market. But aesthetic improvements are less of a factor, says IHS Global Insight analyst John Wolkonowicz. "If you move a dealership to get in the right population area, that's one thing," Wolkonowicz says. "But if it's about building Taj Majals, it's a waste of money. That kind of thing matters for Cadillac but not for mass-market brands like Chevrolet and Buick."

The move is not only part of GM's efforts to spruce up its brand image but also its move to strengthen its dealer network. When the company was in bankruptcy this summer, executives announced a plan to cut 2,000 dealers and get the U.S. total down to 4,000 by 2010. The idea was to give the remaining dealers a bigger market area and a chance to make more money, says Mark Rikess, president of Rikess Group, a dealer consulting firm in Los Angeles.

The problem GM and other domestic automakers have is that their dealers greatly outnumber those of foreign carmakers. A Toyota dealership might sell 1,400 cars a year, more than triple what many domestic brand dealers sell. So the dealers in every town compete on price and give their profit away to consumers, making it tough to retain experienced sales staff and upgrade facilities, Rikess says.

But there is one element that is at odds with GM's new marketing strategy. While GM's new ads will directly compare the virtues of its new models against imports—say, a Chevy Equinox vs. a Honda CR-V—pushing dealers to move import stores away from GM stores makes it tougher for shoppers to make those comparisons on the showroom floor. Says Rikess: "Now you'll have to go down the block to do that."

Chevrolet, Buick, GMC and Cadillac dealers:If you participate in the GM Standards for Excellence Program, how will you fulfill the new Reputation Management dealer implementation requirements for 2013?"GM Primary Reputation Management from Cobalt is a self-service, reputation management solution providing the best tools and technology in the market to generate reviews, manage your online reputation and leverage customer feedback to showcase the dealer's brand and commitment to providing great…Continue

Influencer Comment by Auto Digital Marketing on November 11, 2009 at 5:49pm
What is YOUR impression/perception/opinion/concerns about or in regards to the GM Essential Brand Elements (EBE) Program?

It appears that EBE will pay dealers a per vehicle bonus for each vehicle ordered (not sold), within the calendar quarter if dealers do the following:

The word on the street is that dealers who meet the first three requirements immediately and the facility requirement within a certain period of time, say one year, will be paid the full EBE incentive monies. If the facility is not completed within the agreed time, GM will be kind enough to “escrow” your EBE money until you do comply. For those BMW dealers reading this column, this will sound a whole lot like the vaunted “Added Value Bonus Program,” complete with holding incentive monies hostage to coerce a dealer to spend millions on a new facility.

The flaw in GM’s new program is the same as in all similar programs, including Added Value, and that is the blanket requirements to have a facility with certain image detail, specific square footage in each department, a certain number of parking spaces, and a baseline minimum acreage for the dealership site will never be a “one-size fits all” prospect. There will always be dealers, and in this economic climate likely many more dealers, who cannot justify the expenditure required to meet the program guidelines. In other cases, there will be dealers who, due solely to their location in a metro market, cannot expand their facility to a contiguous parcel or move to an entirely new location in order to meet the square footage, parking, and overall acreage requirements. On the other hand, there will also be dealers who haven’t remodeled their dealerships in a number of years and, all else being equal, will determine that the required facility upgrade will be a good business decision. The dealers who do not comply with the EBE requirements, regardless of whether compliance was even possible, will be placed at a competitive disadvantage by not receiving incentive monies.

The bankruptcy judge’s ruling potentially gives GM dealers the ability to successfully challenge GM’s requirements if their state franchise laws restrict a manufacturer’s ability to force you to comply with any terms of the Participation Agreement. If requirements within the EBE are unenforceable in a particular state, then GM cannot indirectly require compliance by withholding incentives, which are necessary to keep the dealer competitive in the market.

Many state franchise laws specifically restrict manufacturers from requiring facility upgrades or renovations unless the manufacturer can demonstrate that the costs associated with those changes are justified. Likewise, many state franchise laws limit the amount and type of training that can be required of a dealer. If your state law does not contain these types of fundamental protections, I would urge you support your dealer association in pursuing such additions to your state law.

There is an added layer of protection from the EBE program for GM dealers located within a state that contains an express prohibition against the manufacturer selling a vehicle to a dealer at a different net cost, after all incentives and rebates, than that which it sells to any other dealer. In that situation, the GM dealer won’t have to argue that withholding EBE incentive monies from a dealer whose state law protects him or her from meeting one or more of the program requirements amounts to an “indirect” violation of the law. Instead, dealers can point to the express prohibition on discrimination in the payment of sales incentives, and argue that the failure of GM to pay dealers who haven’t complied with the EBE program requirements is a “direct” violation of state law.

As the EBE program is rolled out, we would urge GM dealers to consult experienced motor vehicle legal counsel to determine which, if any, requirements of the EBE program are permitted within your state. For those dealers who determine that one or more of the program requirements violate state franchise laws, dealers should insist on payment of the full incentive in order to ensure their ability to be competitive in the market.

Richard Sox is a lawyer with the firm of Myers & Fuller PA, with offices in Tallahassee, Florida and Raleigh, North Carolina. The firm’s sole practice is the representation of automobile dealers in their quest to establish a level playing field when they deal with automobile manufacturers.