What Will Dealers Do With Flip Cams Going The Way Of The Dodo Bird?

Say it isn't so... Cisco says Flip has got to go!
The networking and router company Cisco is shutting down the consumer-oriented Flip camera business that it bought for $590m in 2009. The move will mean the loss of 550 jobs worldwide, cost Cisco $300m – and disappoint thousands of users who had enjoyed the devices' simplicity. 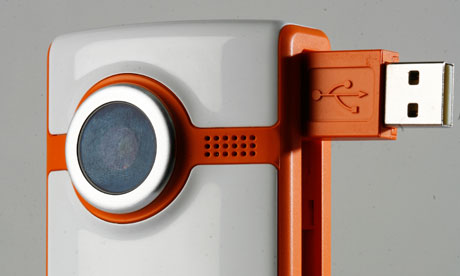 The shutdown, announced on Tuesday afternoon as part of a widespread reorganisation as the company attempts to rejig its business, will see Cisco reorganise its remaining consumer businesses to support its existing "key priorities" – notably the routers and switches that generate the majority of its sales.

Though Cisco never broke out revenues from the Flip division, they are believed to be small: its latest accounts show that "other products" – understood to include its Linksys routers and Flip cameras – generated revenues of just $211m in the most recent quarter, down from $229m the previous quarter. Profits or losses for the division were not disclosed.

A spokeswoman for Cisco would not say whether the company had tried to sell the Flip business, but the fact of the closure suggests it was impossible to find a trade buyer.

That in turn suggests that the stand-alone movie camera business is effectively dead, killed off by smartphones capable of shooting high-definition video which have seen explosive sales in the past 18 months – precisely the period since Cisco bought Flip.

The Flip camera, made originally by Pure Digital Technologies, burst to prominence in September 2007, before the widespread penetration of smartphones. Only 80m smartphones were sold in 2007 – but that rose to 304m out of the 1.6bn phones sold in 2010. By contrast, Flip had sold 2m of its cameras by January 2009. Yet it was one of the most popular stand-alone camcorders on sale through Amazon, and in 2008 it was estimated to have a 17% share of the $2.4bn camcorder market – behind only Sony, with 21%. But Sony held on to its lead and seems to have extended it in 2010 as the low-end market was eaten by mobile phones with video capability.

Flip's devices were hampered because while they were the same size as a smartphone, they could not offer a number of features that smartphones or high-end "feature phones" could, such as uploads to online sites; but they didn't offer other features either such as Wi-Fi connectivity – though this was often hinted at by executives – or microphone sockets, which could have made them useful for some professionals. At the same time high-end professional cameras have begun to offer high-definition filming, leaving the Flip models without a viable market.

Cisco is embarking on a widespread review of its businesses. A week ago, Cisco chief executive John Chambers sent employees a memo vowing to take "bold steps" to narrow the company's focus after several quarters of disappointing results – though the company is far from loss-making: in its last financial year, to the end of August 2010, it saw revenues rise 11% to $40bn and profits up 26% to $7.8bn.

The 550 job losses will have little impact on the total headcount within the 73,000-strong company, and a spokeswoman said it would try to find them jobs within Cisco.

Cisco's spokeswoman would not guarantee that the Linksys router business was guaranteed to survive the review, but said that it offered a "market-leading product" and that it demonstrated a good fit with Cisco's core businesses.

• Ray Sangster, Flip's chief executive for Europe, Middle East and Africa, spoke to the Guardian's Tech Weekly podcast in July 2009, insisted that the acquisition would bring "synergies" between Linksys, Cisco and Flip but that he couldn't discuss them at the time because "they haven't been finalised".

When Arnold Tijerina informed me that my beloved Flip Cams were being pulled off the market, I immediately went to the Cisco owned website at http://store.theflip.com and ordered a customized Flipcam to be made with the Automotive Digital Marketing Professional Community masthead logo wrapped around its exterior... I may be the only person who thinks Cisco is making a mistake, but will still advise dealers to order their Flipcams before the end of production makes them the ultimate automotive cyber geek collectible!

What's your opinion? Will you miss being able to run down to a Best Buy and pick up a Flipcam for less than $200???

Flip cameras are outstanding tools for dealers to use. It's sad that Cisco has decided that personal video cameras are becoming irrelevant due to the proliferation of HD quality video from smartphones that they've decided not to remain in the consumer space with this product. Buy all you can now!

P.S. Thanks for the mention, Ralph!

InfluencerPermalink Reply by Curtis D Snyder on May 26, 2011 at 8:30am
I am upset they will not be making the Flip any longer. I will be buying up another while I still can. My original flip bought long ago has been a rockstar for both my new and used car internet sales. Never once failing me in the last three years.

I wouldn't touch a Flip cam with a ten foot pole.  That industry is for the true Gorillas like Sony and Kodak that dominate in quality and function (Put yours in a shadow box on your desk Ralph and still be cool!  It's a dinosaur.).  The Flip brand fell behind.  It was never there in my opinion.  Smart phones have quickly passed them and the original camera gurus are still producing the best quality "flip" style cameras on the market today.  It's definitely a name that will be synonymous with the last standing brands though.  End of a product but not for their competitors.

OK, Jason and ken... Maybe I am a dork for enjoying my flip cam, but as Popeye would say "I 'yam what I Yam!" and I have a brand new Flip Cam wrapped with the ADM logo waiting for me when I travel back to PHX from Washington DC tonight, and I am excited about it... I like the fact that I can put it in a shirt pocket, and it takes up to 4 hours of video that automatically upload to my YouTube account when I stick the USB prong into my laptop.  Archaic and out of date? Certainly by your standards... But, I also have a 2002 Ford Expedition 4x4 urban assault vehicle that gets 15 MPG (with a tailwind) on a good day that I own, love and don't think twice about taking out into the desert... I can take my Flip cam anywhere and if I lose it, drop it into a lake or the ocean, or leave it inside the seatback pocket of an airplane... Oh well, I'm not out that much and the value of the videos i took before losing, destroying or otherwise wrecking my Flip cam are priceless, while replacing one costs less than taking a dealer and GM out to lunch!

It may not be cool or state of the art, but I love my Flip cam and am thinking about buying a dozen before Cisco stops selling them as throwaway/giveaway/experimental spares...

InfluencerPermalink Reply by John Weltz on May 30, 2011 at 5:49am
Kodak's Zi8 is better than a Flip anyway. It is the only Flip comparable with external mike jack .....good audio is underappreciated.

A personalized Flip camera is still cool though, Ralph.  It's too bad that Cisco couldn't move forward with their technology.  Also shows that any large company faces fierce competition at all levels.  We'll still enjoy the movies you take with the flip and probably won't see the differences for a while.  I say we start a challenge for you and your Flip.  Let's have some fun. I'd like to see a movie of your Expedition bouncing through the desert to start off with!  Accept the challenge?

InfluencerPermalink Reply by Stacy Mueller on June 3, 2011 at 9:02am

It seems like there is still a market for these Flip Cams, especially for a business like car dealerships. They would be excellent for making a quick and relatively high quality video of a car on the lot. I know that a lot of the business these flip cams might be getting is being replaced by smart phones with video capabilities, but often the quality is not the same. An iPhone might be able to make a video in HD, but there's a certain unsteady quality of the hand that shows through in the final product which you wouldn't see in a flip cam.

Frankly, flip cams seem like a great tool for dealerships to make and distribute short clips on the cheap. It's easier than hiring an entire crew! You could upload it directly to the dealership's twitter or facebook with minimal editing.