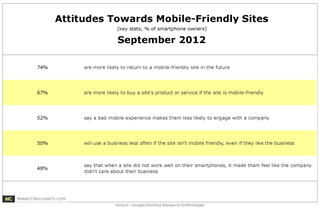 Most smartphone users say they’re more likely to make a purchase at a mobile-friendly site, but that they’re quick to move to a competitor if they don’t like the site experience they encounter, finds Google in new research conducted by Sterling Research and SmithGeiger.
Two-thirds of the smartphone internet users surveyed said they were more likely to buy from a business or car dealership with mobile-friendly site, and three-quarters would return to one in the future. And while offering a mobile-friendly site has benefits, failing to has its consequences. Half of the respondents said that even if they liked a dealership, they would use it less often if its website failed to meet their mobile-friendly standards.

A Chief Marketer survey released in June found that roughly half of the marketers surveyed either have optimized their main web... for viewing over mobile browsers (31%) or run a separate mobile-specific website (17%). For those who haven’t yet optimized their sites, there’s no hiding from the Google respondents: 96% said they had encountered sites that were clearly not designed for mobile devices.

Details from Google’s “What Users Want Most From Mobile Sites Today” indicate that about 3 in 5 smartphone users would quickly move to another site if they didn’t immediately find what they were looking for on a mobile site, suggesting that its not enough to have a mobile-optimized site, but that the experience has to be top-notch, too. 4 in 5 respondents who don’t like what they find on one site said they would search on another site, meaning that a poor experience could steer business to competitors.

Indeed, half of the respondents said that a bad mobile experience would make them less likely to engage with a company or dealership.

Further report findings suggest that car dealerships not optimizing their sites could damage their reputation among these smartphone using automotive consumers. About half said they feel frustrated and annoyed when they access a site that’s not mobile-friendly, and the same proportion said it made them feel like the company or dealership didn’t care about them. More than one-third feel that they’ve wasted their time.

Car Dealers looking to provide the best experience to smartphone users need to provide users with the ability to take action when on the site. Other details from the study suggest that the key actions most users want to take on mobile sites are getting a location or business hours (76%), click to call the dealership (61%), sending an email (54%), and downloading an application (48%). Also important are getting to the dealership’s social networking page (48%) and playing a video clip (41%).

In terms of the most popular features, smartphone owners primarily want: a search bar that is both easy to find and use (78%); to have just 1 or 2 clicks for more information (78%); for the site to fit the small screen (76%); for there to be an option to go to the full site (74%); and for the site to look clean and efficient (74%).

Roughly 7 in 10 want big, finger-friendly buttons, and slightly less than two-thirds for there to be scrolling one direction only.

About the Data: The Google data is derived from a survey of 1,088 US adult smartphone internet users in July 2012.

What has your experience been in dealing with car buyers or service customers that want to use their mobile devices to engage with dealership staff?

In my work on the retail side, I haven't encountered feedback in either direction, with a mobile site fed by cobalt. But taking these data a step farther, I can see this puts an even greater importance on availability when someone makes contact, from extended BDC hours to interactive chat.

InfluencerPermalink Reply by Rite Cars on September 28, 2012 at 7:27am

Great thoughts Ralph I appreciate the Insight and I'm sure my boss will as well...