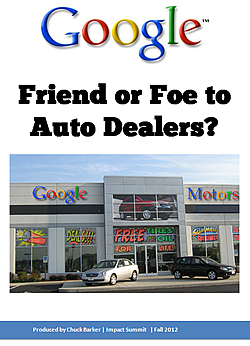 We all know that Google is the dominant search engine on the Internet with over 66% of the market.  Consumers look to Google for a myriad of reasons and Google with its voracious growth appetite continues to expand into various markets and businesses.

Marketers in the auto space seem to inundate us with posts about the latest Google gadgets, process, network, tips, tricks, and inside secrets to give dealers an edge in the all omnipotent Google-sphere.

Well, after doing some research and looking at the big picture I have to ask the question, “Are these experts we’ve been listening to looking to help auto dealers for the long term or looking to make a quick buck based on a dealer’s social media naiveté?”

I’ve just completed a detailed report that takes a close look at Google’s business practices and shows the vulnerabilities of dealers who choose to use the Google services and platform to boost their business.  As we have seen recently, Google has been removing dealer’s reviews while pushing their other revenue generating services to auto dealers.  Is it possible that Google is using the Trojan Horse strategy to lure in dealers before they “strike?”

If you want to see what could possibly happen to our industry, I invite you to download my report and review the facts about Google’s business strategy and the potential avenues for them to enter the auto business in a big way.

Doug;  I was curious to see the services you offer dealers but got an error message when I went to visit your site.  http://www.sharphooks.net   Do you have a new URL?

I am in the process of converting that website to Wordpress.  I was having a lot of hosting issues.  It was continually going down and I was having issues with emails.  I hope to have it all resolved in a week.

This looks the conversation that we had about a week ago.  Doesn't it?

I owe Mark Dubis a big thank you for redirecting my attention to this post, and more importantly, the PDF file of the eBook that Chuck Barker wrote as a result of his research.  Since the early days of dealers directing customers to post reviews of their sales and service experience on Google, I have been skeptical of the practice, taking a lot of criticism for being contrary to where every other consultant seemed to be taking dealers.  My reasons were quite simple, Google is consistent at one thing... Constantly changing the rules, algorithms, features and functions of their apps.  Ever since I got burned by Google's killing their Google Audio program in May 2009, I have held a healthy skepticism for any process that places the dealer overly dependent upon a Google App that may easily be terminated at any time.  It is easy to tell which Google Apps should be overly relied upon: Any Google App That Does NOT DRIVE REVENUE! So, for example, Gmail is safe, it generates enormous amounts of revenue from advertising and the many fee based users, such as myself.  Google Adwords is a sacred cow, of course... But, those business reviews were NOT making Google any money and that is why I have warned dealers NOT TO DRIVE REVIEWS INTO GOOGLE unless their customers choose Google from amongst many choices... Anyways, download the newly attached PDF from Chuck Barker, read it and you will gain a more balanced perspective on Google's role as a dealership marketing resource.

You have obviously spent a great deal of time working with car dealers and can empathize with the issues that make running a successful car dealership such a challenge.  However, one of the facts you sight in your report demonstrates why Google would never move into our space...

Google could buy a publicly owned dealer group. AutoNation last year had a gross profit of $2.31 billion and $461 million in income before taxes. Google could easily pay ten times earnings and acquire AutoNation. Can you imagine having 258 franchises with the resources of Google behind them? How would your locally owned dealership compete against a juggernaut like that? "

For a car dealer $461 million EBIT sounds like an amazing accomplishment, but if you dig a little further into the numbers to find the net profit AutoNation and the other publicly traded companies deliver to their stockholders, it is much less than 10% of revenue.  Most independent operators are happy if they can squeeze 5% net profit out of their dealership.  Silicone Valley entrepreneurs and venture capitalists would run screaming from a business that required so much work and delivered so little profit.  Google is looking for business models that deliver 50% net profit, not 5%.

There is a big company that is comfortable making a really low margin on a high volume of sales.  They also have a lot of foot traffic already coming through their door.  However, the franchise laws keep them from selling new cars.  They could sell used cars and they even tested the concept in Texas a few years ago when Asbury set up the Price-1 lots at a few of their superstores.  It was a big failure, but it doesn't mean they won't try again.

But I really don't think this is a question of big versus small or national versus local.  When I started at CarMax back in 1999 they had 5 stores.  Every time we opened a new market, the local dealers would try to get their planning commissions to block us.  They thought the big national chain was going to come in and put them all out of business.  But what actually happened is that CarMax advertisind drew a lot more shopper traffic to the strips and automalls where they were located and the good operators who were close to CarMax saw their business increase.  The guys who did go out of business were the ones who would have been put out of business by ANY good operator giving the shopping public a better alternative.

So the real issue isn't whether you are big or small, independent or franchised, stand alone or part of a group.  The real issue is whether you can aquire good inventory at a good price, effectively market your business, and deliver a superior customer experience.

As far as Google is concerned, we are all paying them too much money.  The recent Dataium/Cars.com study shows that most consumers are searching for your dealership using your dealership name.  Think about that, they already know your dealership name when they use google search.  So you have already paid advertising dollars to educate your potential customers about your business, and now you have to pay Google again to keep your competitors from poaching your customers.  What we should really be doing is forming gentlemen's agreements not to bid for ads on each other's brands.  If Westside Toyota doesn't pay Google to display ads on searches for Eastside Toyota, then Eastside Toyota won't have to also pay Google for ads on Eastside Toyota.  Then we would just have to figure out how to keep AutoTrader and Edmunds from buying ads on Eastside Toyota so they could get unique visitors to their sites to see the Toyota banner ads that Toyota pays for, passing along the expense to Eastside and Westside Toyota.  It's the lack of a coordinated strategy among dealers and OEMs that explains why the dealers have a 5% profit margin and the digital advertising companies like Google, Edmunds, and AutoTrader have a 50% profit margin.

InfluencerPermalink Reply by Doug Davis on September 30, 2012 at 8:54am

So the real issue isn't whether you are big or small, independent or franchised, stand alone or part of a group.  The real issue is whether you can acquire good inventory at a good price, effectively market your business, and deliver a superior customer experience.

Unfortunately, for the car business, most dealership personnel don't visit sites like ADM, DealerElite or DealerRefresh.  At most stores, the Internet Director is an ASM, that was promoted to the position because nobody else wanted it.   They are trying to figure out how to incorporate the internet into their old school philosophy.  They did the marketing by buying a website.   Superior customer experience?  Hire a company to write some fake reviews.

My degree is in Accounting, not because I really liked the subject, because it was easy.  Dealerships are not embracing the internet because the "old school" way is what they know.  They can't figure out how to aggressively market their cars and still make money.  The key is in the three largest variable expenses.  Actually, that was the key to profitability before the internet.

As far as Google is concerned, we are all paying them too much money.  The recent Dataium/Cars.com study shows that most consumers are searching for your dealership using your dealership name.

I have been watching Big Data for some time.  I was surprised that the Dataium report didn't get more play on the internet related sites.  If these were the Wall Street Journal  it would have been front page news.