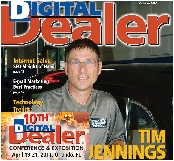 Export to Outlook or iCal (.ics)

YouTube Video Walk-Around: Show the Future Now with Video!
Use video to build a relationship digitally before you meet fleshly


Back by popular demand – one of the best attended sessions of the last three Digital Dealer Conferences. In the past three years, Tim Jennings has done almost 700 video walk-arounds and 100 customer testimonials that he has hosted on YouTube and the dealership web site. Nothing he did in the 19 years of s...elling cars had had a faster return on time and effort than this. Two days after posting his first five videos, a customer walked into the showroom and said: "Hey, you are the guy in the video!"

You will receive all the info you need to have video up and running in one hour. Also, let Jennings show you some short cuts he has learned in the last year that will save you time and effort. By the way, did we mention this is free technology?

Tim Jennings has 20 years of retail automotive selling experience, 17 years were at Tom Sparks Auto of DeKalb. Recently Jennings became the newest member of Sift Digital Consulting Team. Jennings welcomed the task of running the Internet department in 1999. At that time, the rest of the staff wanted nothing to with it. Often fellow employees would tease about the "Internet mooches." He spoke at the 2007-2010 Digital Dealer Conferences and is back delivering actionable information for 2011.